The Beginning of the End for the Leaders Of The Free World…Humanity Awakens!

The Beginning of the End for the Leaders Of The Free World…Humanity Awakens!

In just the past few weeks, First Lady Michelle Obama, Former Secretary of State Condoleezza Rice and Attorney General Eric Holder have had to cancel appearances due to protests.

They’re just the latest in a long line.

Michelle Obama cancelled the commencement speech she was scheduled to give at a Kansas high school after nearly 2,000 people signed a petition protesting her appearance.

Over the weekend we learned that former Secretary of State Condoleezza Rice has cancelled her appearance at Rutgers University due to protests. Condoleezza wrote,

“Commencement should be a time of joyous celebration for the graduates and their families,” Ms. Rice wrote in a Facebook post. “Rutgers’ invitation to me to speak has become a distraction for the university community at this very special time.”

Rutgers faculty and anti-war activists berated the university administration for offering Rice the speaking slot, citing her “efforts to mislead the American people about the presence of weapons of mass destruction in Iraq.”

That cancellation came only one week after Attorney General Eric Holder’s last-minute cancellation of his speech at a police academy graduation to 42 cadets. Holder’s cancellation comes on the heels of the House holding him in contempt for road-blocking an investigation into a covert gun-running sting called Fast and Furious.  His appearances prompted threats of protests, with opponents noting that Holder was an “ironic” choice of speaker because of his “tactics of obfuscation and redirection of blame” as attorney general.

The recent cancellations come after many US leaders have had to cancel appearances as people all over the world wake up to their violent and criminal ways. Former Vice President Dick Cheney has had to cancel multiple appearances, for example, in Canada because it was “too dangerous” for him, a former leader of the “free world.”

“Basically they felt that it would be a major security issue if Vice President Cheney came back to Canada,” said Ryan Ruppert, president of Spectre Live Corp, which was promoting Cheney’s speech.

The first time, in 2011, Cheney’s appearance at a $500-a-plate book club dinner in Vancouver last September had a shadow cast over it by protestors who blocked the entrance to the venue and were beat by police. Cheney had to stay inside while police dispersed the crowd.

The protestors were calling for Cheney’s arrest over war crimes.

George W. Bush had to cancel a visit to Switzerland where he was to address a Jewish charity gala. He was worried about possible legal action against him for alleged torture as pressure has been mounting on the Swiss government to arrest him and open a criminal investigation if he enters into the country. Swiss judicial officials have said that Bush would still enjoy a certain diplomatic immunity as a former head of state.

In 2002 Henry Kissinger cancelled a trip to Brazil because of human rights protests. Kissinger was even sought by French police during a visit to Paris in a case involving a French citizen murdered by the US-backed military dictatorship in Chile.

The state as a façade is fading as the Internet helps people wake up to the true terrorists and criminals. We expect more of these types of protests to cancel future events in the US and elsewhere, and many of the top criminals in the US government will continue to have a hard time travelling internationally without being arrested for their crimes.

A new poll surveying young Americans’ political attitudes released by Harvard University’s Institute of Politics Tuesday found millennials have less trust in government than ever before – that includes the Presidency, the military, Congress, the Supreme Court, and the federal government as a whole. The President and the military lost the most trust among young Americans with a seven point drop. The pollsters said the level of trust millennials have in “most American institutions tested in our survey” had dropped below even “last year’s historically low numbers.” Look at this dramatic drop:

The pollsters also created this chart showing young peoples’ levels of trust in almost every public institution. Across the board, the “commanding heights” of society are not trusted. 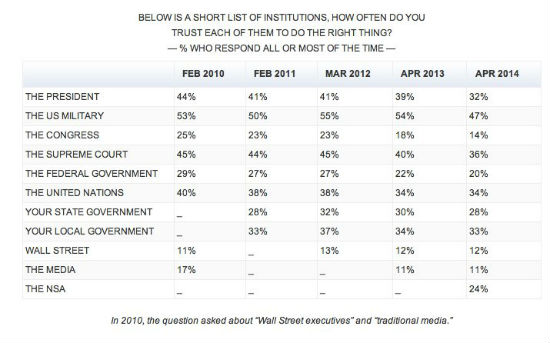 “Currently, less than one-in-four (24%) young Americans under the age of 30 say that they will  ‘definitely be voting,’ in the upcoming midterm elections for Congress, a sharp decrease of 10 percentage points since the Fall,” the pollsters said. “During a similar time of the year in 2010, 31 percent of 18- to 29-year olds reported that they would definitely vote.”

The people are awakening and it is beautiful to watch.

2 Comments to “ The Beginning of the End for the Leaders Of The Free World…Humanity Awakens!”