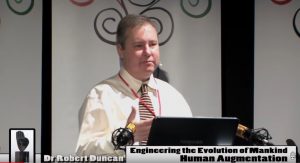 Dr Robert Duncan, expert in Cybernetics and Cyborg technologies and author of the book Soul Catcher (taken from British Telecom’s Soul Catcher program) delivers the first of two lectures at the 2015 Bases Project 2nd International Conference and Film Festival, held at St Johns Theatre on the Hill, Marlborough, Aug 1st 2015. Robert made a point to putting a positive spin on the modification of human beings to cyborgs, as its simply a natural part of the development of man from the cave. Not his words, but mind. The intention being to defuse the fear of having various types of advanced technology, from the nano-teck Google tattoo, to exoskeleton body suits.

Miles first met Robert at Lorien Fenton’s Super Soldier Summit, in 2013, near Las Vegas. This was also the first time Miles met Sarah R Adams, who co introduces Robert, with Ben Emlyn Jones. Max Spiers and Sarah deliver their second lecture presentation in the Bases Lectures series on Day 3 of this event. Lorien was to speak at this event, but a sudden lack of internet facilities prevented this from happening. Dr Duncan has previously worked on secret programs in UK Secret military bases some years ago, which he makes reference to.

This lecture was immediately preceded by a concluding lecture from Harald-Kautz-Vella, whom Robert makes reference to in this presentation. Harald is seen in the final Q&A, part of Roberts lecture With thanks to Matthew Williams for Outside Broadcast vision mixing, and for giving Robert a secret tour of the crop circles, prior to his departure on Tuesday. Difficulties with sound are apologized for. A lack of crew being the problem.