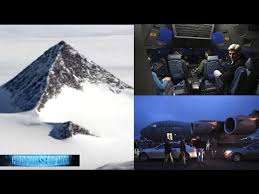 With a slow start, the video takes you to a place few even know of. Was there an ancient race that lived in the Antarctic? Do they still live there, and are they ‘not so ancient?’ Do they control the world? Who, are, ‘they?’ Does Atlantis ‘exist, flourish and thrive in the Antarctic, with a race of highly intelligent beings whom control the world? History seems to imply that something is going on in the Antarctic and always has been going on. Are the pyramids under the Antarctic causing the global changes on earth? Strange reports of strange lands, strange, and ancient creatures, aliens, reptilians, and UFO’s, ‘all’ have been reported ‘by those with credentials’ (you see, few without ‘ever’ get to go there. Have you been there?). Take that into account when doing your research. Research Hollow Earth, and Flat Earth where more evidence seems to imply, strongly, that we are not alone, at all, on this planet earth, and that there may be another species / race of intelligent being so very advanced (even so advanced to move landmasses, and melt ice faster than you ever could), that they appear magical to us mere humans? You be the judge. Around the 25 minute mark of this video, you may be thinking differently (come the half hour mark? You’re watching till the end).
Ponder, wonder, think and dream.
It’s what we’re here for.
🙂
I hope you enjoy.

I created this video with the YouTube Video Editor (http://www.youtube.com/editor)