The 8th Day: And There Was Awareness, Awakening, And Full Re-Membering Of The Truth

The 8th Day: And There Was Awareness, Awakening, And Full Re-Membering Of The Truth 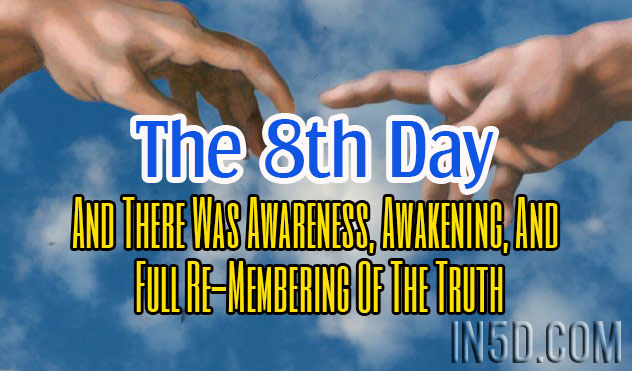 Once upon a time, in the future, all people of the Earth became aware that they were One. In this oneness they were linked with one another from heart to heart, where each heart knew, loved, and respected the love-light essence of all other hearts it was naturally connected to. In their hearts, that eventually became one infinite heart space, the people of the Earth re-imagined their future and their past, and filled them with joy, harmony, and rapidly expanding awareness of who they were in their integrity, in their love towards themselves and each other, and in their creative self-expression. That creative expression was in touch with wisdom and awareness of the people’s sacred and loving union with the Source of all life, who was expressing itself through their dreams about the future.

The dreaming collective heart linked itself with the heart of the Earth and asked it for forgiveness. The Earth heard the loving prayer of the people and it remembered the time when the innocent baby vibration of the humankind, at the beginning of its development was disrupted by that which she, herself never approved of. She remembered the time when the original baby-humanity loved the Earth and the Earth loved that innocent, playful, creative, and rapidly evolving baby. That same baby later caused a lot of hurt to itself and to the Earth. Its unity with the Earth was severely damaged, broken, and eventually forgotten for many eons. The dreaming collective heart was now asking for forgiveness and restoration of the lost union with the Divine Earth. She accepted the prayer and both, the heart of the Earth and the collective heart of the humankind, began to dream together again.

And then, in this unified dream, the humankind reconnected with all levels of Creation, where other collective hearts were dreaming together their creations. The reconstruction of the original dream was taking place everywhere. The Source became known to all and all became fully known to the Source. The holy grand cycle of Creation fulfilled itself through that which only awakened heart can comprehend.

The beginingless end and the endless beginning met one another in one single spark of awareness.

The dreamless dream was the Source that can only be known through timeless awareness.

The rest of the story can be read in your own heart and accessed by it. Every heart keeps the same completion of the story. To enter your heart space you must unite your self-love with the love for the Earth, the Sun, and the Stars, and also feel love for all life on this planet and beyond. This will elevate you back to your heart space where the concluding part of the story is known.

About the author: Andriana’s main life and professional activity has always been focused on Consciousness, Human Potential, Personal Development, Evolution, and how one’s mind, and different levels of Consciousness manifest corresponding nature of reality. She is also gifted in the area of Arts and has a talent for uniting concrete, linear, fragmented, and logical with expanded, creative, and seemingly illogical, a big picture where all connections exist and function at the same time. She has integrated the results of her extensive studies into her current practice, which together with her Personal and Spiritual awareness evolves and expands on a continuous basis. It is her natural choice and a blessing to all her clients. Andriana works with various modalities (among which are Transformational Imagery, EFT, Energetic NLP, Past life regression and regression to one’s Source Origin (many people don’t have past lives), Sedona Method, and for the most part – her own Higher Consciousness Toolkit). She also utilizes practical knowledge of the latest research and discoveries made in the fields of Psychology, Quantum Physics, Energy Psychology, Brain Science, Physiology, Microbiology, and Neuroscience.