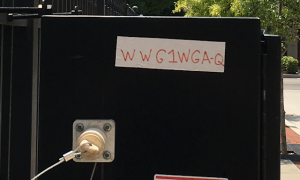 Denice: Watching an old Big Bang show. , . and someone gives Penny a Thor comic. . , she says, ” oooh he’s hot” . . lol. AND the rest of the boys are stranded in the desert dressed in Star Trek costumes. Lol

Denice: Btw Calm before the Storm took on a whole new meaning after I watched BZ, Sheila, Lisa, and David.

Terran: H was hilarious this afternoon on phone call

Denice: Did she see Francis?

Terran: Should have by now

Denice: Happy you are nearly home.

Terran: “Sun I ladybug” wonder what that was about?

[Saw a galactic ship flying over I-5 shortly after the above exchange.]

Denice: Got a message. When I turned on the computer, a blank word doc opened. I fully expected someone to begin typing. . lol. .  I will copy it to skype asap

Terran: That was on your computer?

Denice: I was nudged to begin typing

Terran: So you typed it?

Denice: Yes as it [telepathy/comms] flowed.  [Denice has an excellent long term track record working with me and Heather]

Terran: I have a few blog posts to post

Denice: H sent me a nice message. I am going to trust myself.

[Denice, like me, was feeling the stress of the court hearing and doubted her intuition. I made a post before the hearing about Q then deleted it shortly later as I didn’t like the feel of what I wrote. Heather taught me the body does not lie about what it senses and after I wrote that post my body felt really off.  So I deleted it.

Denice was seeing Heather released. Obviously that didn’t happen on the 17th but does not mean it will not happen. Denice was doubting her abilities No date was given with the intuitive data she got. Heather told Denice she received the data correctly.]

Terran: Who is behind the message?

Stan X: DEAR ONE/TERRAN. THE SUPPORT TEAM OF THE ALLIANCE IS BEHIND THE MESSAGE. DATA COLLECTORS. STAN. X. END.

From the Q group:

You ask who is Q? What is Q? is more complete.

Q is a team of “off planet” and earth-based men and women.  The “SPACE FORCE” is no coincidence.

The Heliocentricity of the “planets” AKA “SPHERES” is fortuitous and allows for an amplification of energetics.

“NO THING IS WHAT IT SEEMS” is playing out in full force now.

Watch for the acceleration as “Q” returns. End.