Take the power back from LUCK… 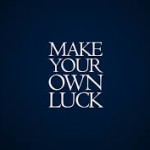 Take the power back from LUCK…

I’ve noted that’s so easy to give away my power without even thinking of it much. How often do we not hear that we are either LUCKY or UN-LUCKY…?

If that is not enough often we give others credit such as “God/Source” or “Angels” and “Guides”. Why? If God is omnipresent than God/Source is everywhere, right? It’s not wrong to give God/Source credit as long as you realize that God/Source is within you.  I’m convinced that part of this belief system of LUCK etc is distorted. Luck does imply that things happen randomly. Now how can that be? Look at nature and every little organism, look at our metabolism, awesome creations made of luck? Yeah, right?

Let’s go through an example, a personal experience from last weekend when I was driving a car fast in heavy rain in order to get back to work with customers waiting.  I can firmly say that I made the “wrong” choice going 80.7 mph during this weather condition in one sense! But on another sense I was supposed to have this experience.

I lost control of the vehicle in curve just before a bridge due to lot’s of water on the road all of a sudden and my body screamed hell no f****g way I consent to a severe car crash, and acted accordingly working the steering wheel and brakes simultaneously without hesitation or thought.

When I finally got the car to stop I faced the wrong direction but was on the right side of the road which had not been the case seconds ago. Gasping for air and with my heart pounding I thought THAT WAS  too close. Two cars passed without stopping heading in the other direction when I was standing still. It was dark and the road lights where on but it must have looked more than weird from the outside with the car spinning all of a sudden?

Now some would argue that this was LUCK and or that I had help from other forces no matter what we call them. I do understand this thinking cause those thoughts went through my own mind as well!!

But I’m convinced that LUCK had nothing to do with it and that I managed this by myself more or less in my own TRUTH. I had probably help by others but the gist of it is that I made it due to my own efforts mainly even though I don’t have a clue how!!

I’m very humble about the whole incident but still since the New Earth is about to be given birth or actually is birthed right now, there are entities trying to De-rail New Earth’s effort’s to move on. However to De-rail her does not work since this is not supported.

The car incident is a clear signal to me that we are way more power full than thought. I’ve been in situations with both my kids and both my siblings where “bad luck” could have been responsible for lot’s of things. In three situations there was water involved which is very interesting but I was at the right spot on the exact right time.. and LUCK had nothing to do with it.