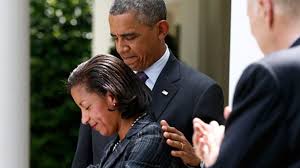 This video is about Susan Rice Unmasked Trump Team, 1566

President Obama’s National Security Advisor, Susan Rice, deliberately unmasked President-Elect Donald Trump, and other incoming Trump officials, according to reporter Michael Chernovich.
Furthermore, Chernovich learned that New York Times reporter Maggie Haberman has had this story for at least 48 hours, and has chosen to sit on it in an effort to protect the reputation of Obama.
According to Chernovich:
“The White House Counsel’s office identified Rice as the person responsible for the unmasking after examining Rice’s document log requests.”
“The reports Rice requested to see are kept under tightly-controlled conditions. Each person must log her name before being granted access to them.”
According to Chernovich two other people close to Obama had authorization to unmask the names of Americans as well: CIA Director John Brennan and then-Attorney General Loretta Lynch.
Yesterday, Fox News announced that House Intelligence Committee Chairman Devin Nunes, R-Calif, knew who unmasked General Michael Flynn, saying that the person was:
“… very well known, very high up, very senior in the intelligence world.”
I had speculated that that person may have been Jeh Johnson, the former Director of Homeland Security. We will see in the morning if the Fox report confirms that it was indeed Susan Rice.
If it was Rice, that puts the source of this felonious conduct right at the door of former President Obama.