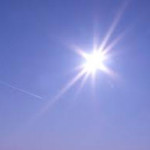 (Health Secrets) Are you getting sun exposure?  The sun is the life force, and virtually every living thing on earth resonates to the energy of the sun and seeks a place under its radiance. Trees and plants turn their leaves to capture the essence of the sun’s life force. Animals bask in its warm soothing rays. If you have houseplants, notice how their leaves are turned toward the window. Close the blinds and watch their shoots try to grow through the slats to get to the sun’s rays. Watch the behavior of your pets as they seek the blessings of the sun’s energy.

If the sun is out today, look out your window and watch the dance of nature that’s occurring under that mighty glow. Then take off your clothes and go join the rest of the creatures that inhabit the earth in the great sunbath. Don’t be afraid of sun exposure. Let your common sense inform you that when you seek the sun you are in step with the rest of nature and doing what you were designed to do.

The reason people get skin cancer is the same reason that they get any other form of cancer.  They are not living in a healthy way and in harmony with nature. The farther away you live your life from the tenets of nature, the more likely you are to have cancer or other degenerative diseases. Slathering yourself up with sunscreen in fear of sun exposure is an example of living far outside of nature.

Researchers at the consumer watchdog Environmental Working Group (EWG) have released a report confirming nearly half of the 500 most popular sunscreen products actually increase the speed at which malignant cells develop and spread skin cancer, because of the retinol and retinyl palmitate they contain, and the mineral particles used to keep the solution clear. The FDA has known for years that these substances are cancer causing, but they have not taken any steps to protect people.

Then there is the issue of vitamin D. There is usually not a week that goes by without a news announcement somewhere about the health benefits of vitamin D. Yet most of these announcements suggest you should get vitamin D in an unnatural manner, from a pill, rather than getting it in the way nature intended, by sun exposure. Does it really make sense to sit inside or all covered with toxic chemicals and swallow vitamin D pills?

Because common sense seems to be out of style these days, let’s take a look at the latest research on the sun and skin cancer.

A recently published study from Bethesda MD examined the relationship of sunlight to cancer using participants who were actively observed for a long duration. It found that people who are exposed to more sunlight have a significantly lowered risk of many types of cancer. The study followed 450,000 Caucasians aged 50-71 from geographic areas across the U.S. for over a period of nine years, and used hazard models to eliminate other risk factors. The scientists correlated the typical ambient ultraviolet radiation (URV) with a variety of cancers.

Over the nine year period of follow up, UVR exposure was significantly inversely correlated with total cancer risk, meaning that higher levels of UVR were seen in those with lowered cancer risk. Twelve types of cancer were identified as risk-reduced by UVR exposure, including cancers of the lung, prostate, pancreas, colon, thyroid, non-Hodgkin’s lymphoma, kidney and bladder. Risk of melanoma was moderately elevated.

A recent study from the Cancer Institute of California examined the association between UVR exposure and cancers of the lymphatic system in 121,216 women. Researchers found that large B-cell lymphoma, chronic lymphocytic leukemia/small lymphocytic lymphoma, and multiple myeloma were negatively correlated with UVR exposure, again meaning that higher rates of UVR exposure were correlated with lowered rates for these cancers. Interestingly, they noted that vitamin D was not associated with risk of lymphoid malignancies, suggesting the sun confers other protective benefits we have yet to learn.

In Sweden, researchers investigated the effects of sunlight on the risk of several diseases. Their study used a large cohort of women aged 30 to 49 who were followed for fifteen years. They found that women who got sunburned twice or more per year during adolescence had a reduced mortality rate from all causes compared with women who had been sunburned once or less. A reduced risk of death from cardiovascular disease was observed in women who went on sunbathing vacations more than once a year over three decades. However solarium use once or more per month for at least one decade increased risk of all-cause mortality when compared with women who never used a solarium.

If you are following the principles of good health articulated in the issues of our newsletter, you are probably in fine form to face the sun. If you are just beginning your quest for health, be sure your body is amply supplied with vitamins and antioxidants from eating fruits, vegetables and salmon or other oily cold water fish before you go outside. One of the best antioxidant supplements for sunbathing is astaxanthin. Other terrific antioxidants are found in chlorella and spirulina. Probably the easiest way to get a big antioxidant boost is to put a scoop of a top quality superfood powder in some water and drink it before going outside.

If you haven’t been in the sun for years, build up your sun exposure slowly. If you want to spend a lot of time in the sun and not get excessively sunburned or tanned, the simplest thing to do is put on a lightweight tee shirt.  Sunscreen should not be used.

Don’t fear the sun. Let it shine on you and let its energy soak into your bones, tissues and psyche. Reconnecting with the sun is a big step in embracing the life giving force of nature.

Leave a Reply to I M Power Cancel reply