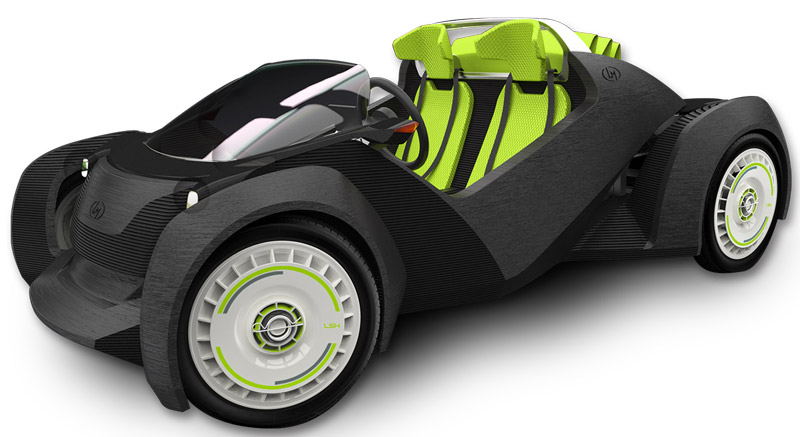 3D printing technology is evolving so fast that car manufacturers can now use it to quickly and efficiently print car parts. Not too long ago, Local Motors shocked the world by creating the world’s first 3D printed electric car. What is somewhat surprising about 3D printing technology is that certain scientists are currently testing it to see how well it can print body parts.

Unlike traditional printers, 3D printers can build physical three dimensional objects from scratch using a layer by layer method which produces less waste. This feature is one of the reasons why additive manufacturing is more popular than subtractive manufacturing in 3D printing applications.

3D Printing is all the rage these days, so it’s no surprise someone has printed a complete and functional electric automobile, appropriately named the Strati (Italian for “layers”). 18 months ago, Phoenix Arizona company Local Motors teamed up with Cincinnati Incorporated to develop a neighborhood electric car. The project is open source; members are encouraged to share their vehicle design ideas, which are then produced and perfected by the community. The components are then printed by the Oak Ridge National Laboratory. French automaker Renault produces the electric car battery, motor and suspension. The two seater has a top speed of 40mph and a range of 120 miles.

Here is an excerpt from YouTube.com about the Strati:

This 3D-printed electric car will be manufactured with Oak Ridge National Laboratory (ORNL) and delivered at the International Manufacturing Technology Show (IMTS) in September of 2014.

The Strati will be 3D-printed in just 44 hours, in one piece, using direct digital manufacturing. The design for the 3D-printed car was first submitted during the Local Motors 3D-printed Car Design Challenge when over 200 entries were accepted from a massive online community of designers and engineers. The winning design will heavily influence the look and feel of the Strati 3D-printed car.

Local Motors is an open-source hardware company that works with the community to bring ideas to reality. Local Motors is the maker of the Rally Fighter, an open-source off-road vehicle designed for the desert terrain of Arizona and street-legal in 50 states. The company has also created the Racer motorcycle, the Cruiser motorized bicycle, and the popular Verrado Drift Trike.

If you’d like to learn more about the world’s first 3D-printed car, the Strati, head over to our official website and see for yourself: http://localmotors.com/3dprintedcar