Strange messages coming from the stars are ‘probably’ from aliens, scientists say 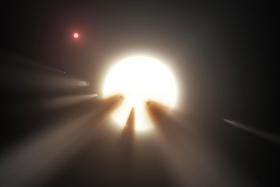 Strange messages coming from the stars are ‘probably’ from aliens, scientists say
‘It is too early to unequivocally attribute these purported signals to the activities of extraterrestrial civilizations,’ a group of scientists looking for aliens have warned – but the signals are encouraging”
by Andrew Griffin, published on Independent UK, on October 25, 2016

Scientists have heard hugely unusual messages from deep in space that they think are coming from aliens.

A new analysis of strange modulations in a tiny set of stars appears to indicate that it could be coming from extraterrestrial intelligence that is looking to alert us to their existence.

The new study reports the finding of specific modulations in just 234 out of the 2.5 million stars that have been observed during a survey of the sky. The work found that a tiny fraction of them seemed to be behaving strangely.

And there appears to be no obvious explanation for what is going on, leaving the scientists behind the paper to conclude that the messages are coming from aliens.

“We find that the detected signals have exactly the shape of an [extraterrestrial intelligence] signal predicted in the previous publication and are therefore in agreement with this hypothesis,” write EF Borra and E Trottier in a new paper. “The fact that they are only found in a very small fraction of stars within a narrow spectral range centered near the spectral type of the sun is also in agreement with the ETI hypothesis,” the two scientists from Laval University in Quebec write.

The research has appeaed in the journal Publications of the Astronomical Society of the Pacific, under the title ‘Discovery of peculiar periodic spectral modulations in a small fraction of solar type stars’. It appears to have been originally suggested for publication with the name ‘Signals probably from Extraterrestrial Intelligence’, according to a pre-print version of the paper hosted online.

Breakthrough Listen – an initiative set up this year to look for alien life and supported by people including Stephen Hawking and Mark Zuckerberg – said that the message was promising. But they said that further work will have to be done before they can be “unequivocally attributed” to aliens.

“The one in 10,000 objects with unusual spectra seen by Borra and Trottier are certainly worthy of additional study,” the team said in a statement. “However, extraordinary claims require extraordinary evidence.

“It is too early to unequivocally attribute these purported signals to the activities of extraterrestrial civilizations. Internationally agreed-upon protocols for searches for evidence of advanced life beyond Earth (SETI) require candidates to be confirmed by independent groups using their own telescopes, and for all natural explanations to be exhausted before invoking extraterrestrial agents as an explanation.

“Careful work must be undertaken to determine false positive rates, to rule out natural and instrumental explanations, and most importantly, to confirm detections using two or more independent telescopes.”