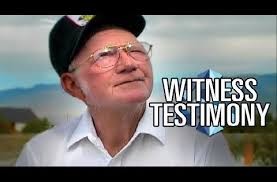 Bill Uhouse served 10 years in the Marine Corps as a fighter pilot, and four years with the Air Force at Wright-Patterson AFB as a civilian doing flight testing of exotic experimental aircraft. Later, for the next 30 years, he worked for defense contractors as an engineer of antigravity propulsion systems: on flight simulators for exotic aircraft — and on actual flying discs. He testifies that the first disc they tested was a re-engineered ET craft that crashed in Kingman, Arizona in 1958. He further testifies that the ET’s presented a craft to the US government; this craft was taken to Area 51, which was just being constructed at the time, and the four ET’s that accompanied the craft were taken to Los Alamos. Mr. Uhouse’s specialty was the flight deck and the instruments on the flight deck — he understood the gravitational field and what it took to get people trained to experience antigravity. He actually met several times with an ET that helped the physicists and engineers with the engineering of the craft.