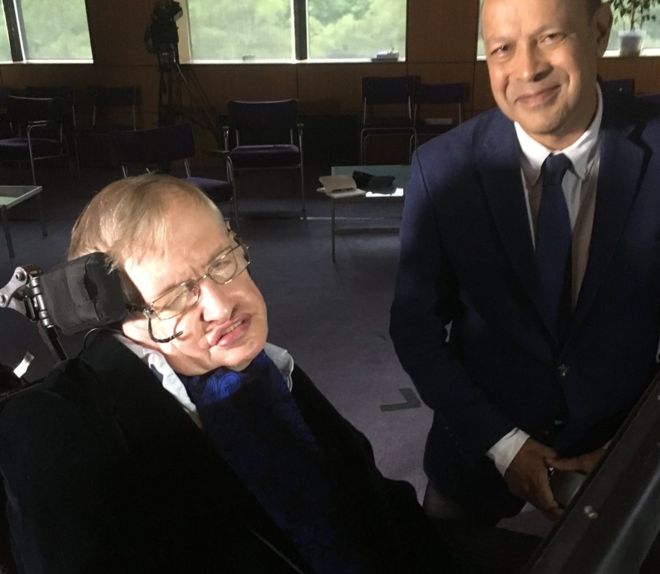 Last October I invited Prof Stephen Hawking to comment on the detection of gravitational waves from the collision of two neutron stars. It turned out to be his final broadcast interview.

The collision was a really big story for many reasons, not least because within minutes of the detection the world’s telescopes were trained on what was an incredible cosmic event.

This meant that as well as detecting the ripples in space-time from the merger, astronomers could see also for the first time what happens when two incredibly massive objects come together in a process that may be the only way of creating gold and platinum in the Universe.

It was definitely one for Prof Hawking to explain.

In recent years, he made comments about climate change, space travel and artificial intelligence. His interviews always captivated audiences. I was lucky enough to have interviewed him many times and for me he was at his most enthralling when he was on ‘home turf’ – talking about the physics he so loved and bending our minds with the implications of new discoveries. And I was so touched and honoured to hear from his staff that he had always enjoyed our encounters.

I was only able to use one answer in my news report and so the rest of his interview was not broadcast or published. Here it is now in full. He leaves us with his trademark, awe-inspiring take on a cosmos that, as we look through his eyes, we should view as both beautiful and mysterious.

Tell us how important is the detection of two colliding neutron stars?

It is a genuine milestone. It is the first ever detection of a gravitational wave source with an electromagnetic counterpart. It confirms that short gamma-ray bursts occur with neutron star mergers. It gives a new way of determining distances in cosmology. And it teaches us about the behaviour of matter with incredibly high density.

What will we learn from the electromagnetic waves emanating from the collision?

The electromagnetic radiation gives us a precise location on the sky. It also tells us the ‘redshift’ of the event. The gravitational waves tell us the luminosity distance. Combining these measures give us a new way of measuring distances in cosmology. This is the first rung of what will become a new cosmological distance ladder. The matter inside a neutron star is much denser than anything we can produce in a laboratory. The electromagnetic signal from merging neutron stars will tell us about the behaviour of matter at such high density. 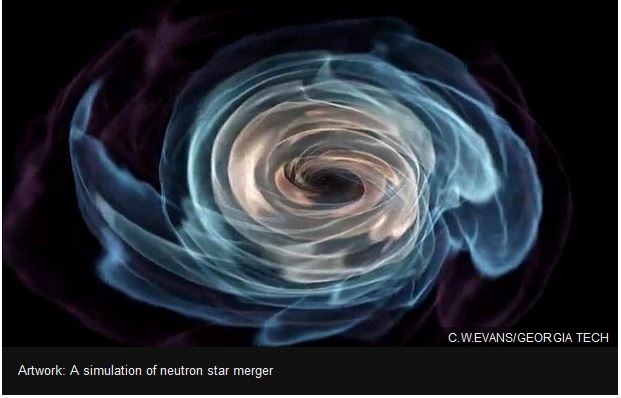 Will it give us insights into how black holes form?

The fact that a black hole can form from the merger of two neutron stars was known from theory. But this event is the first test, or observation. The merger probably produces a rotating, hyper-massive neutron star which then collapses to form a black hole.

This is very different from other ways of forming black holes, such as in a supernova or when a neutron star accretes matter from a normal star. With careful analysis of the data and theoretical modelling on supercomputers, there is vast scope for new insights to be obtained about the dynamics of black hole formation and gamma-ray bursts.

Will gravitational wave measurements bring us a greater insight of how space-time and gravity operates and so transform our understanding of the Universe?

Is the collision of neutron stars one of the very few ways, or possibly the only way, that gold is produced in Universe. Could this explain why it’s so rare on Earth?

Yes, the collision of neutron stars is one way of producing gold. It can also be formed from fast neutron capture in supernovas. Gold is rare everywhere, not just on Earth. The reason it’s rare is that by nuclear-binding energy peaks at iron, making it hard to produce heavier elements in general. Also strong electromagnetic repulsion must be overcome by the nuclear force in order to form stable heavy nuclei like gold.