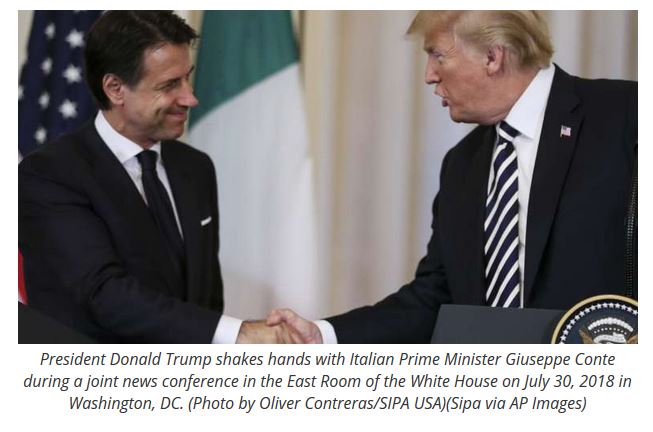 The move is being seen as the Conte government’s response to the previous government’s coordinated surveillance activity with U.S. intelligence officials during the 2016 U.S. election.

Partito Democratico replies: "it's a regime", but in Rome, everybody knows its' all about SpyGate and Trump sabotage.https://t.co/6M6WrLns2S

In fact, underlines La Repubblica , a complete reset, excluding the directors – two of whom have already been appointed by this government – of the entire top-level framework of our Services.

There are six, in total, free seats at the top of the Services that the majority must have been parting for some time: in fact, in addition to the four who resigned, there is the vacant one in Aise after the appointment of Luciano Carta at the top of the Agency and that of Vincenzo Delle Femmine, deputy director of the Aisi retired from June.

The shake-up comes as “SpyGate” (known in Italy as “ItalyGate”) heats up with new developments breaking almost every day.

Former Trump campaign adviser George Papadopoulos believes that the mysterious Maltese professor Joseph Mifsud, who vanished from the public eye in late 2017, was spying on him during their encounters in 2016.

Remember the text messages between Strzok and Page on March 14th, 2016, where they are discussing “their guy now talking”? That was the same day I met Mifsud in Rome. Conspiracy is a hell of a charge. It’s coming down on a lot of these freaks.

The Socialists in Italy are apparently in a snit over Conte’s move:

Italian Socialist Senator ask to PM to withdraw the resignation ‘s request of 6 deputy directors of italian secret services, concerned by the “reputation of Italian intelligence “. Why the “socialists “ are so concerned?? @GiuseppeConteIT go ahead! #usa is our ally. #Clarity https://t.co/IuTVINCYuD

Mifsud was reportedly hiding out last year in a rented flat in Rome for several months while being sought by an Italian court. The flat was paid for by “Link International,” a company co-owned by Link Campus University.

Papadopoulos pleaded guilty in October of 2017 to making false statements to FBI agents about the timing of his contacts in 2016 relating to U.S.-Russia relations and the Trump campaign.

He appeared on Fox News with Laura Ingraham on Thursday to talk about the latest developments.

G-Pop revealed that at one point (in 2017?), the FBI tried to talk his then-girlfriend, now wife, Simona Mangiante Papadopoulos into wearing a wire to entrap him.

He said that before she came to visit him as an Italian citizen, the feds subpoenaed her and tried to “flip” her against him.

“What we think they targeted her for is she knew all about Joseph Mifsud’s connections to the Italian government and his connections in Europe,” he explained.

He added: “We just found out today that the Italian government under the … prime minister of that country — they just fired the heads of three intel agencies in Italy. And I think it has to do with this person Joseph Mifsud, who the president and Devin Nunes and others have been asking the government in Italy to examine a lot more. Because he’s actually at the core of this whole scam.”

After Ingraham played a clip of former CIA Director John Brennan insisting that the surveillance of the Trump campaign was “well predicated,” Papadopoulos noted the FBI had set him up to meet with Mifsud before his name was even public.

Then, he told Ingraham, he met in April of 2016, with the Australian diplomat Alexander Downer, who he believes was spying on him.

Papadopoulos said the reason he suspects Downer was spying on him is because when he was being interviewed by members of the House Judiciary Committee, Republican members like Mark Meadows and John Ratcliffe asked him if he’d ever been presented with transcripts of any meetings he’d had with Alexander Downer, Joseph Mifsud, “or any of these strange people who were running into me.”

“I think Congress probably has transcripts, They probably already know and the president already knows that these people were spying and that’s going to be a big bombshell moving forward,” he told Ingraham.