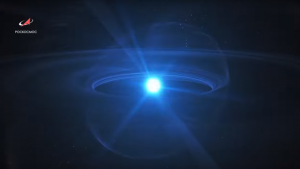 These signals, emitted by distant ‘blinking’ stars, were converted into music, with each having its own frequency and distinct sound. Video released by the Russian space agency Roscosmos shows them all ‘playing’ together.

Pulsars are fast-rotating neutron stars. The rapid spin allows them to sweep the sky like lighthouses with powerful beams of electromagnetic radiation. That’s why they appear to be constantly ‘blinking’ to observers on Earth.

The frequency of their signals, recorded by the Russian Spektr-R radio telescope, also known as RadioAstron, was converted into soundwaves, with each pulsar having its own unique tune.