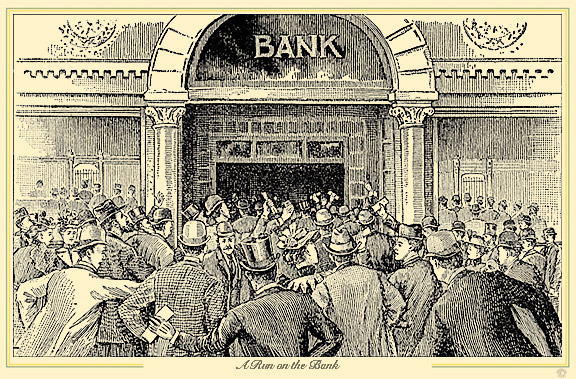 A little over three weeks ago, I became aware of a sudden and dramatic change in the US Banking System that made my stomach sick. I “sat” on this story for almost three weeks hoping what I found was some type of anomaly or data error. It’s not.

Bankers have almost completely stopped lending . . . . TO EACH OTHER.

The plunge in “InterBank Lending” was so sudden and so substantial that it looks as though it is actually a PLAN, not happenstance or situationally appropriate.

It LOOKS like the Bankers are intentionally choking the US Economy and they’re doing so at levels far FAR worse than what took place during the “Fiscal Crisis” of 2007-08.

For more than 45 years, the Federal Reserve has tracked virtually E V E R Y aspect of banking in the United States. They literally look at EVERY financial metric and provide incredible amounts of public reporting to anyone willing to spend time on the Federal Reserve Electronic Data (FRED) web site.

As your trusted media servant, I peruse vast amounts of information every day to keep you abreast of what’s taking place, and give you insight as to how and why certain things happen.  So when I undertook my usual perusal of FRED and saw what I am about to show you, I was shocked.

First, let me explain what INTERBANK lending is.  The interbank lending market is a market in which banks extend loans to one another for a specified term. Most interbank loans are for maturities of one week or less, the majority being overnight. Such loans are made at the interbank rate (also called the overnight rate if the term of the loan is overnight).

A sharp decline in transaction volume in this market was a major contributing factor to the collapse of several financial institutions during the financial crisis of 2007.

Banks are required to hold an adequate amount of liquid assets, such as cash, to manage any potential bank runs by clients. If a bank cannot meet these liquidity requirements, it will need to borrow money in the interbank market to cover the shortfall. Some banks, on the other hand, have excess liquid assets above and beyond the liquidity requirements. These banks will lend money in the interbank market, receiving interest on the assets.

The interbank rate is the rate of interest charged on short-term loans between banks. Banks borrow and lend money in the interbank lending market in order to manage liquidity and satisfy regulations such as reserve requirements. The interest rate charged depends on the availability of money in the market, on prevailing rates and on the specific terms of the contract, such as term length. There is a wide range of published interbank rates, including the federal funds rate (USA), the LIBOR (UK) and the Euribor (Eurozone).

Having now explained what INTERBANK LENDING is, and how it is  H U G E L Y important for those funds to be available so banks can go about their daily business without running afoul of the law or Depositor needs, take a look at the FRED Data for INTERBANK LENDING for the last twelve months: (Click image to enlarge)

Did you see the problem? Let me point it out:

Each of those years had a week between Christmas and New Years.  NOT ONCE IN 45 YEARS did the Interbank Lending grind to a halt as it has now.

Therefore, 45 years later. in an economy that is much, MUCH bigger, the Interbank Lending has collapsed to about 1/2 of what it was in 1973.

What happened to cause this?  Good question.  And it is a question that NO ONE in the Banking Community seems willing to speak with me about.

We’ve got ALL the banks here; ALL of the biggest, most powerful, most influential banks.

We’ve got back-office Bank Operations occupying entire skyscrapers.  Tens-of-thousands of people in the Banking industry . . . . and I know a LOT of those people, socially and professionally.  NONE of them will talk about this.  Not a peep.  Nothing.

THAT is troubling to me.

That tells me “trouble.”  It also tells me that the recent major swings in the Stock Markets are directly related to this.

If Interbank Lending has suddenly stopped . . . . because Bankers have DECIDED to stop lending to each other (as opposed to not trusting each other), then it stands to reason that Banks which NEED liquidity to meet regulations and cash requirements, would have to get that cash from somewhere else.  The easiest place: The Stock Markets . . . . the Banks can sell-off stocks they have acquired and use the cash to bolster themselves.

This makes a lot of sense when you consider that, on Friday, February 2 (one month into the collapse of InterBank Lending)  the Stock Market fell 666 points.  If this was due to economic worries by the general public, we would expect to see a rise in the price of Gold.  It is well established that when Investors are worried about the future, they buy Gold.  But that didn’t happen.

So the money pouring OUT of the Stock Market was NOT going into Gold!  The cash was going somewhere else.  But where?

Days later, on Monday, February 5 – the first open market day since the 666 plunge, The Dow Jones industrial average plunged more than 1,100 more points as stocks took their worst loss in six and a half years.

Between Friday and Monday, those two days of steep losses erased the market’s gains from the start of this year and ended a period of record-setting calm for stocks.

To me, this is proof that the hundreds-of-billions of dollars coming out of the Stock Market on Friday, February 2 and again on Monday, February 5 is NOT due to Investors seeking safety.  The money is going somewhere else.

Now, I am not a licensed financial planner and cannot offer financial advice.  All I am doing here is my job as a Reporter/Journalist/Radio Host, to present the facts and offer my personal views which are clearly evident on their face.  DO NOT MAKE ANY FINANCIAL DECISIONS BASED ON WHAT I PUBLISH HERE.  Consult with a Licensed Financial Expert before making any financial decisions.

Having said that, I still must ask: Why has the Interbank Lending ground to a virtual halt and where is the money going from all the Stock market sales?

It seems to me that either:

1) Banks are selling-off their own Stocks to get cash to sustain themselves (very bad sign) OR . . . . .

2) Someone is pulling HUGE amounts of cash OUT of US Banks and they are scrambling to survive. (Much worse), or

3) The Bankers have decided they don’t like new found American Nationalism and are deliberately choking our economy to force a Globalist Agenda upon our President and our people by breaking our economy and saying Globalization is our only hope.

I can’t help but wonder – and this is pure speculation on my part — if perhaps Saudi Prince Alwaleed, having recently been released from custody in Saudi Arabia, is somehow trying to punish the US for the “situation” he found himself in, and may be pulling-out his vast wealth?  I have NO EVIDENCE to substantiate this, but when a guy THAT wealthy, gets imprisoned (and reportedly tortured) he may have an “ax to grind” and definitely has the wealth to hurt those who may have hurt him.  We also know he is no fan of our President.

Or could this be something else? Something far worse?

Could this be a situation that mimics the 1981 movie with Jane Fonda, Chris Christopherson and Hume Cronin entitled” ROLLOVER?”  The situation being reported in this post could very well be the start of real-life efforts portrayed in that movie!

You folks had best prepare, right now.  Just in case.  Have emergency cash (to survive, not to pay bills) emergency food, emergency fuel for cars, trucks, generators. Extra medicines you may need to survive. and such.   Those interested in a list of items to have so as to “Prep” may find THIS LINK useful.

Here’s a short clip with the essentials from the movie “ROLLOVER.”  If _this_ is what’s actually taking place, the world is screwed.