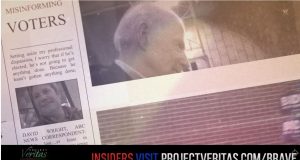 They suspended a senior political reporter before Project Veritas even published the story!

This is the second time that Project Veritas exposed ABC News in the past few months.

Here is the full statement from ABC News to Project Veritas: 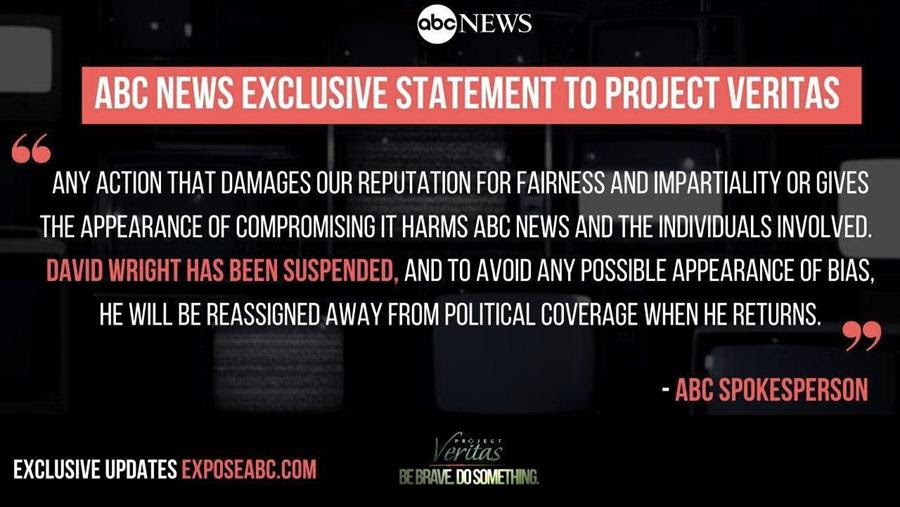 A little piece of history: ABC News used to do undercover journalism to expose Food Lion, among others.

Paul Farhi of The Washington Post pointed out a great irony:

“ABC, coincidentally, was involved in perhaps the most famous case involving undercover video.”

Exclusive updates: ExposeABC.com BREAKING: Senior ABC Correspondent David Wright on Hidden Camera: How ‘Bosses Don’t See an Upside’ for Reporting News; ‘The Truth Suffers’; Says ABC Doesn’t ‘Give Trump Credit for What Things He Does Do’; ABC News Producer: New Yorkers Need to ‘Cross the Hudson River’ to Learn Why Voters Back Trump David Wright, ABC News Political Correspondent: “We Also Don’t Give Him [Trump] Credit for What Things He Does do…I Feel Terrible About it, I Feel That the Truth Suffers, the Voters Are Poorly Informed…Our Bosses Don’t See an Upside in Doing the Job We’re Supposed to do.” David Wright: “In Television, We Have Lost Any Sense of Context.” Wright: “We Don’t Hold Him [Trump] to Account. We Also Don’t Give Him Credit for What Things He Does Do.” Are You a Democrat Socialist? Wright: “Oh yeah. More than that I would consider myself a socialist; like I think there should be national health insurance. I’m totally fine with reigning in corporations, I think they’re too many billionaires, and I think there’s a wealth gap–that’s a problem.” Wright: “You Can’t Watch ‘Good Morning America’ Without a Disney Princess or a Marvel Avenger Appearing.” Wright: “We’re in This Awkward Moment…We Have This F**king President, and We Can’t Figure Out How to Challenge Him.” To Andy Fies, ABC News Producer: “People in New York Are Constantly, I Think, Fascinated by, ‘How Can People Like Donald Trump?’…You Know, Well F**k! Cross the Hudson Now and Then, and Come Out and Spend Some Time, and You’ll Hear Why!” Fies: Real People, Practical Issues? “Those things aren’t TV-friendly.”