#SnowdenandChill: This is the most hilarious CNN interview ever 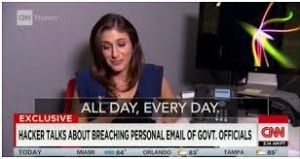 #SnowdenandChill: This is the most hilarious CNN interview ever

The teen who hacked the CIA Director’s email just gave CNN the most hilarious interview ever.

Last week, US Uncut reported on the young hackers who managed to compromise CIA director John Brennan’s personal email account. CNN Money Tech Correspondent Laurie Segall managed to get the hacker on the phone for a short conversation that had us crying tears of laughter.

“Can you give us any indication of your background, I mean, how old you are, are you in the United States, I mean, anything you can tell me about yourself?” Segall asked.

“All day, every day,” the hacker responded.

“So you’re saying you might have hacked the director of the CIA while you were high?”

The hackers allege they were able to gain access to CIA director John Brennan’s personal email account through social engineering AOL and Verizon. They managed to obtain Brennan’s address, social security number, and bank account information, then used that information to reset the password for Brennan’s inbox.

“He’s pretty stupid, really,” the hacker said, talking about the ease in which Brennan’s account was hacked. “He’s supposed to be so high in the government, like, head of CIA, he should be more clever.”

When asked why they went after Brennan, the hacker responded, “Free Palestine,” noting how the U.S. government funded the Israeli government, and that Israelis “kill innocent people.”

“If this is true, and it’s true you guys have actually hacked into his personal email account, how difficult would you say it is?” Segall asked.

“You mean, like, out of ten?” The hacker responded.

The hackers seemed to be anticipating retribution from the U.S. government for their actions.

“I’m gonna go to Russia and chill with Snowden,” the hacker said. “I know that the government is pretty mad about this. I’m probably gonna get tortured. I’m actually a pretty fast runner.”

Despite their fears of capture and torture, the hackers promised to carry out further actions against additional targets:

“The government, and the police, and the White House people. They’re losers.”

Watch the full interview below: