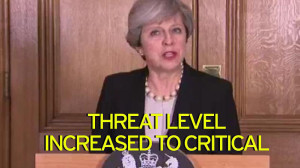 The government of Great Britain has raised the Terror Alert to the ‘Critical Status’.

This is deeply significant and of the highest concern – NOT because more attacks are expected.   (I have been warning that this is so for a considerable time! If the establishment bothered to read my updates they would have known weeks ago! But they don’t)   It’s of the highest concern because I have been told that this new ‘martial law’ allows the British Army to deploy onto the streets and in all public places, and that the army will ‘support the regular police force’.

This latest attack has paved the way for the start of ‘soldiers on the streets of Great Britain’ – A huge step for a country that has never routinely armed its police.

7 years ago in one of my first ever YouTube videos I said that 2017 was a make or break year, and so it is proving to be!

We stand on the verge of the British election being postponed – civil rights being taken away, and martial law introduced with curfews imposed – These details were I understand laid out at the latest ‘COBRA’ government meeting – I appeal to the establishment – “In the name of God, draw back from the brink while you still can”

The next 24 hours are totally and utterly critical in terms of the timeline!