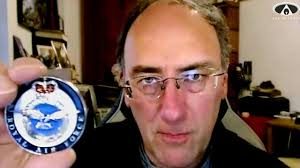 British politician, Labour Councillor, Alien/UFO contactee and lifelong E.T. experiencer SIMON PARKES, who turned whistleblower and one of the most fascinating figures in the Truth Movement, is disclosing some very eye-opening and even disturbing information and telling his unusual and very controversial life story in this new AGE OF TRUTH TV in-depth, hard-talk talk interview from April 2019 with AOT TV presenter Lucas Alexander.

Simon Parkes is also a spiritual channeller, mind control de-programmer, consciousness teacher, truth speaker, lecturer and the man behind the growing international spiritual community platform “CONNECTING CONSCIOUSNESS”. All of his life, SIMON PARKES, have been contacted by Extra-Terrestrial and Inter-Dimensional alien entities, shadow beings as well as having UFO experiences. His unusual life story began long before he was born as Simon Parkes, claiming to be the very first soul able to inhabit a viable human body. He has experienced countless encounters with REPTILIANS, MANTIS/MANTID, GREYS and many other alien types over the years, and was told a very different version of the history of Planet Earth than we are led to believe is true through the media and the history books?

But why are we being lied to and why is there a sinister hidden agenda behind the ruling elite´s power structure of control of the human race? How does that tie in with a hidden Alien Agenda and Satanism? Selected TOPICS: – ALIEN RACES: Reptilians, Mantis/Mantid/ Greys, Nordics, Pleiadians, Lyrans, Felines etc…. – A lifelong history as an Alien contactee and experiencer. – Family history: Mother an MI5/NSA secret agent and Grandfather an MI6/CIA agent and a 33rd degree Freemason. – A.I. Artificial Intelligence and the real reason for 5G. – The most spiritual countries in the world! –

The Elites NWO plan for the Earth. – Flat Earth or Hollow Earth? – The arrest of WikiLeaks frontman Julian Assange. Why and what is behind? – The Saturn Matrix and the Reincarnation Death Trap. Are we imprisoned in a grid around Earth? How to escape? – Satanic blood and energy rituals! Why? – Connecting Consciousness around the world. YOU can join! ……all this and much much more as Simon Parkes takes you on a mind-bending journey into the unknown, questioned in a dynamic interview/conversation with Age Of Truth TV presenter Lucas Alexander. Filmed on the 15th April 2019 at the AOT TV Studios in Copenhagen, Denmark and via ZOOM to Whitby, United Kingdom. For more of SIMON PARKES or Connecting Consciousness: http://www.simonparkes.org PLEASE LIKE AND SUBSCRIBE to AGE OF TRUTH TV! Your support is greatly appreciated. You can also support us via our Age Of Truth TV website: http://www.ageoftruth.tv For further contact: ageoftruthtv@gmail.com © 2019 Age Of Truth TV – ALL RIGHTS RESERVED