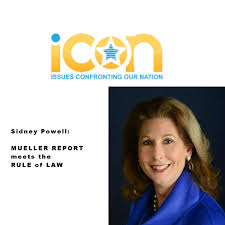 Sidney Powell is the author of License to Lie, the most widely read book on institutional and individual corruption at the US Department of Justice. She is a writer, commentator and former Assistant United States Attorney with inside knowledge and experiences of how the US Department of Justice actually operates. Licensed to Lie is a frightening story of how “justice” is really delivered by the federal government’s most important and most powerful law enforcement agency.

Sidney discusses many aspects of the hyper-political environment in Washington, DC along with many intriguing details of the report and the processes leading to the controversial Mueller Report.

If you’re a fan of the Collusion Conspiracy or a fan of President Donald Trump, this ICON Lecture Series program event, “Muller Report meets the Rule of Law” is perfect for you.

Sidney has been lead counsel in more than 500 federal appeals, 350 of them as an Assistant United States Attorney and Appellate Section Chief in the Western and Northern Districts of Texas. She is a past president of the American Academy of Appellate Lawyers and the Bar Association of the Fifth Federal Circuit, and a member of the American Law Institute. It was from her experiences in several cases that she felt compelled to write.

Sidney Powell is North Carolina home grown – born in Durham and raised in Raleigh with a Bachelors degree and Juris Doctorate from UNC. The ICON team welcomed her to Chapel Hill, NC on April 29th, 2019.