SerialBrain2: Trump, The Hammer, The Beast and Sally Yates 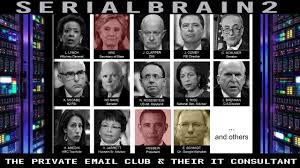 SerialBrain2: Trump, The Hammer, The Beast and Sally Yates

Trump, The Hammer, The Beast and Sally Yates.

Have you caught the recent comms from POTUS about THE HAMMER?

Now that you know about this system and how Hussein illegally spied on millions of Americans with Clapper and Brennan’s help, it should be easier for you to decode the conversation.

Let’s start with the Maestro’s May 14 Press Gaggle: until the end. You caught that? Did you notice he spoke about billions, then switched to millions? How about when he mentioned David and Emerald? Here are a few hints: Img1 I’m sure you want me to tell you about WRAY. I will not. Not now. But I promise I will. All I can say now is:

Now who is this David that Freemasons know and why did the Maestro mention Emerald? Answer: Img2 As you can see, David has been very busy not being busy. From HRC selling State secrets through her private server to The HAMMER running on American soil, to selling our Uranium to Russia, Hussein’s top level administration knew everything. Read very carefully: Img3 You got that? HRC’s server was never hacked, she sold access. Now look how Hussein’s administration willingly participated: Img4 They all had private emails to access the “market” and Eric Schmidt from Alphabet/Google was the anointed IT guy who would set up the communication platforms. Then Q says this:

Why? Because the person who runs the platform has it all. He knows the strengths and weaknesses of all the countries gathering in HRC’s market and can silently sell anything to anyone.

Did the US have some kind of defense mechanism? Yes, we learn from Q1981 that there is a paper trail: the NSA tried to warn Hussein who did not do anything because he was complicit. Img5

Let’s now listen to the Maestro the same day at the Hackberry Rally in LA. Wait a minute. “Hackberry”? You got that one? Yes: hack+blackberry but also BL+H=> Bleach=> BleachBit. The Maestro is referring to the acid washed server and the Blackberries the Witch destroyed with a HAMMER and that have all the evidence about THE HAMMER and her international State secret market. Comms good? Look how in his April 15 2018 ABC interview with Stephanopoulos, High IQ-not-a-weasel Comey lies about it and suggests there are people who resell destroyed phones and other people who buy them: Img6

Now that you know why the rally happened in Hackberry, let’s listen to the Maestro in the first coded area of his speech: until 27:33. Did you solve? You caught his reference to “clean air” was code for the “SMELL in the air” from the White House Red Sox event right? That’s how he was signaling we were entering the coded area. If you still want to play, here is the transcript with highlights to help you decode, try to solve as much as you can: Img7

First, what did he mean with his insistence on the presidential car The Beast? You need to solve: HAMMER+TRUMP+CAR. I told you, I’ll tell you again: always start with the BBC. By doing so, you find this video. “If only cars could talk, what stories this one might tell” and “there’s a lot of beautiful women that’s ridden in me” are pretty straightforward messages right? They tried to threaten Trump with THE HAMMER at the beginning of his presidency and in this bogus report, they told us right there and then about the Stormy play that was coming. Did you detect the Witch in the video, solve the name of the Limo Owner, who he was working for and why they capitalized “Owner”? It’s right here: Img8

As you can see, we caught another David. You remember the Maestro’s old friend I told you about in this post and this image? HRC’s state secret market is an old game the Rockefellers and similar creatures know very well. In one shot, I gave you that the Witch was a Vatican asset and that Rockefeller was a C_A puppet. Pretty cool right?

With this car auction, you now know why they named the system THE HAMMER: they were selling our data and our State secret intel in international auctions.

With all these connections, we’ve established that whatever is connected to the Beast is related to the Vatican (Rev 17:3-4), secret societies (33K emails), treasonous activities (private emails) and espionage in particular (THE HAMMER).

When Trump got elected, the air was not as clean as he mentioned in his Hackberry speech. Remember Chucky? He said this. How about Senator Reid who during the campaign said this? The Maestro had to develop mechanism to detect the traitors. One of them is called the BEAST TEST and is revealed in a tweet where he rhetorically asks if Nadler was going to look into HRC’s 33K deleted emails: Img9

Army tank, windows, walls, John Kennedy… Does it make sense now? The Maestro is referring to operating systems, firewalls, his comms secured by the Military and the enemy multiple attempts to infiltrate his cabinet and assassinate him politically and physically.

This calls for wisdom. Let the person who has insight calculate the number of the beast, for it is the number of a man. That number is 666. Rev. 13:18.

If you notice the Maestro changed the order [Bill, Steve, John] to [Steve, John, Bill], since BSJ=31, we can change the order and get 13, which is the chapter with the beast number 666 in Revelation. Let’s go further: BILL+STEVE+JOHN=153 and the Maestro said: “And I can’t (or can) play with these 3 – Steve, John, Bill, everybody sitting here” which is code for I can move these 3 numbers 1,5,3 composing 153 if I don’t break them down. By doing so, you transform 153 to 15+3=18, which gives you the verse of the beast number within Revelation 13. The message 666 Q is confirmed.

Now what is the intrinsic meaning of I-10, why does he mention a bridge and beauty?

Since I=9, I-10 connects to 90=9×10, which is the value for BEAST MARK and COMPOSED. Bingo! The Maestro wrote “composed” in quotes in his 6:55 May 19 tweet. Coincidence? This is where we need to look at. To make sure we access the core of the information, let’s analyze all the surrounding tweets to gather the pieces of the puzzle. We get these 4 sets: Img10 – Img11 – Img12 – Img13

Here are all the pieces in a synthetic image: Img14 Do your research and try to identify the hidden message.

Here is the solution: Img15

Let’s listen to the Speech Writer Riddle: until 32:19.

Peruvian Coffee for those who solved this one! The key was to make the connection between the year 2015 and $215 billion. Here is the solution: Img16

Now you are equipped to resolve one of the most challenging questions in the Q board.

It’s in Q3210. Q gives us text messages from McCabe. I’ll first give you the appetizer where we discover which technical expertise Brennan and Clapper used to set up THE HAMMER on Obama’s instructions: Img17

And here is the main course: Img18 On Nov 18 2016 McCabe refers to the DAG as HE. But at the time, it was Sally Yates. Did he know RR was coming in or was RR already active? Impossible: Sessions was nominated on Nov 18 and had to take the time to pick RR:

Ready for the Grand Finale? Can you decode this tweet: Img22

What if I told you the Maestro coded Sally Yates in this tweet? Img23 The timestamp brings Q3335. There are 2 missing words in the tweet: IT between ‘before’ and ‘the’ and THE between ‘of’ and ‘two’. This gives us IT THE, and when re-arranged: ET HIT, you know what that means right? Since E=5, T=20 and Y=25, ET=Y and ET HIT can be written Y HIT which when connecting to Comey’s Shit in Q3335 and dropping the doubles, you get YS, which are Sally Yates initials.

Now you know why the tweet is about Gen. Flynn who was specially targeted by Sally Yates and why it reads: ‘being one of two people’ and ‘I could make a change’.

Sally Yates made a change and is now two people. He has willingly become a bridge for dark creatures from extra-terrestrial dimensions to advance the Antichrist agenda. He’s riding the beast. McCabe knew. They all knew.

“Maybe it should just be the first meeting of the secret society” Lisa Page.

They had one at the White House, another one at the DOJ. Do you see the power of the symbol and where they were going?