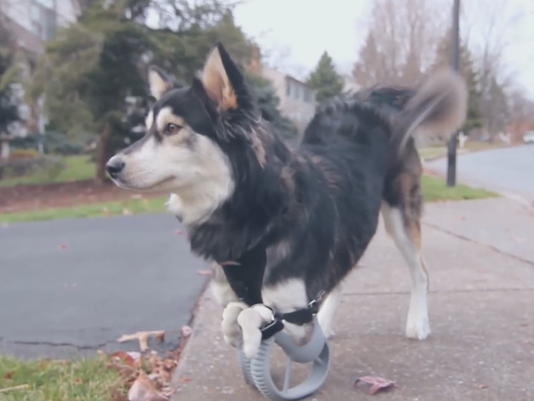 Derby the dog was born with deformed front legs.

Tara Anderson, who agreed to foster him, also works in project management at 3D Systems.

“I had to try and help this dog,” Anderson said.

She got Derby a cart, but it limited his mobility and wasn’t the same as running. So with the help of her team at work, they decided to build Derby prosthetic legs so he could run.

“…Having these images on file and being able to print them is a lot easier than having to hand sculpt every single mold and rebuild these braces five or 10 times,” said Derrick Campana, a ABC certified orthotist with Animal Ortho Care.

They set out to build a prosthetic that would allow Derby to run, starting low so it wouldn’t be too drastic of a change for Derby, Anderson said.

Derby’s adoptive parents Sherry and Dom Portanova were there when Derby got his new legs.

“I don’t become impressed very quickly, but when I saw him sprinting like that, it was amazing,” Dom Portanova said.

Now the dog runs two or three miles with his owners every day. They say he’s faster than they are and never tires out.

“To be able to help anybody — dog, person, whoever — to have a better life, there’s just no better thing to be involved in.”