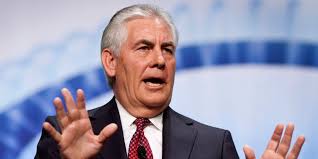 While Rex Tillerson is on his first overseas trip as Secretary of State, his aides laid off staff at the State Department on Thursday.

Much of seventh-floor staff, who work for the Deputy Secretary of State for Management and Resources and the Counselor offices, were told today that their services were no longer needed.

Remember, the “7th Floor” of the State Department was the ‘SHADOW GOVERNMENT’. From October 17, 2016-

A new trove of interview summaries and notes from the FBI’s investigation into Hillary Clinton’s emails lays out a series of allegations that could prove fodder for future attacks on the Democratic presidential nominee.

One revelation in the documents came from an interview with an unidentified person who suggested that Freedom of Information Act requests related to Clinton went through a group sometimes called “the Shadow Government.”

“There was a powerful group of very high-ranking STATE officials that some referred to as ‘The 7th Floor Group’ or ‘The Shadow Government.’ This group met every Wednesday afternoon to discuss the FOIA process, Congressional records, and everything CLINTON-related to FOIA/Congressional inquiries,” the FBI’s interview summary said.

Staffers in the offices of deputy secretary of state for management and resources as well as counselor were shown the door Thursday, according to CBS News.

Many of those let go were on the building’s seventh floor — top-floor bigs — a symbolically important sign to the rest of the diplomatic corps that their new boss has different priorities than the last one.

The staffing changes came as Tillerson was on his first foreign trip — attending a G-20 meeting in Bonn, Germany.