State governments’ practice of spending taxpayer funds to settle sexual harassment lawsuits against legislators and staff has created an uproar in California’s Legislature and other statehouses around the country. Now a picture is emerging of how the U.S. Congress is doing the same thing, with less fanfare and even less transparency.

Democratic Rep. Jackie Speier of Hillsborough said Wednesday that over the last 20 years, Congress has settled 260 complaints of workplace discrimination “at a cost to taxpayers of this country of $15 million,” reiterating a figure she quoted on NBC Tuesday. But it’s unclear how many of those complaints were related to sexual harassment, versus racial or other forms of discrimination, because Congress doesn’t release that information, nor is it subject to Freedom of Information Act requests.

Speier and a handful of other Democrats and Republicans in the House and Senate are pushing to make that information public as part of new legislation they unveiled Wednesday. The Member and Employee Training and Oversight on Congress – or ME TOO CONGRESS – Act would overhaul the system for reporting harassment via the Office of Compliance or OOC, a tiny congressional agency that oversees workplace policies for the nation’s legislative branch, lifting the cloak of secrecy that critics say empowers harassers. “Congress created the Office of Compliance to protect itself from being exposed,” Speier charged at the press conference. “And it has been very successful.”

Among other things, the bill would require the OOC to publicly identify the offices that have paid settlements for discrimination violations, the amount of money paid, and the number of allegations lodged against each office. The agency would also have to submit a report on those details to members of Congress.

As of now, even members of Congress like Speier don’t have access to that information. The Ethics Committees in the House and Senate can access records from the OOC. But per House rules, the only lawmakers who are allowed to review the settlements are the chairman and ranking member of the House Administration Committee, which oversees the chamber’s internal operations. The funding for the settlements comes from a Treasury Department account dedicated to court judgements and settlements against the federal government. The current Administration Committee chairman, Republican Rep. Gregg Harper of Mississippi, has yet to receive any settlement requests since taking over at the beginning of 2017.

The proposal released Wednesday would allow parties to settle harassment or other discrimination complaints without approval from the House Administration Committee or other congressional panels, although they would still have the authority to set ranges for settlement pay-outs. In addition, members of Congress could not use taxpayer funds to pay for any settlement for a complaint against them, personally. That would have to come from their personal funds.

The legislation, which New York Democrat Kirsten Gillibrand is sponsoring in the Senate, would also get rid of a requirement in the current law that forces victims to sign a non-disclosure agreement to pursue a discrimination complaint through the OOC.

The move to shine more light on Congress’ spotty record on sexual harassment could face resistance from within. Capitol Hill has been slow to respond to the #MeToo movement that emerged on social media in the wake of the explosive revelations detailing Hollywood mega-producer Harvey Weinstein’s history of predatory behavior towards women. While female legislators, staffers and lobbyists in California and elsewhere have called out political leaders for tolerating a culture of harassment, female members of Congress have been much slower to share their stories of past harassment and assault in Washington.

Last week, more than 1,500 former congressional aides signed a letter calling for an overhaul of Capitol Hill’s handling of sexual harassment. But few current staffers have come out to disclose harassment, reflecting deep seated fears that the publicity could hurt their careers. Speier testified at a House Administration Committee hearing on sexual harassment Tuesday that she has heard from dozens of fellow survivors since she shared her story on Twitter of being assaulted as a congressional staffer in the 1970s. That includes two who here harassed by current members of Congress. But she declined to identify those lawmakers Wednesday, explaining, “The victims are the ones who do not want this exposed.” 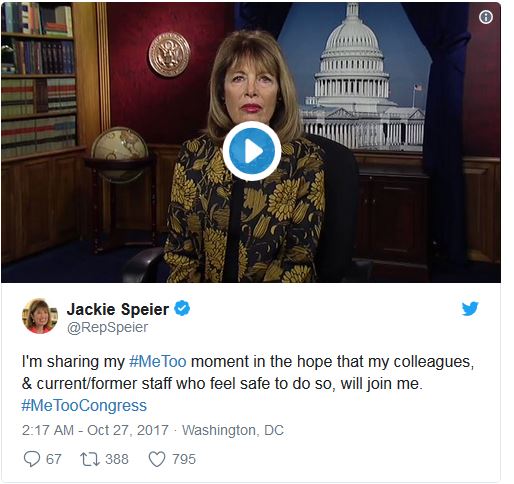 Play Twitter Video click here
In the past week, congressional leaders have responded to the growing uproar by passing legislation to mandate sexual harassment training for all lawmakers and staff, something Speier had been pushing for several years.But they’re not likely to move nearly as quickly on this latest proposal. On the Senate side, Gillibrand is still working to round up support from Republican colleagues. And Rep. Bruce Poliquin of Maine, one of two Republican co-sponsors of Speier’s bill, said he has yet to pitch the legislation to House Republican leaders. “I’ve talked to a bunch of folks on the floor and they’re very positive about it but we’ve been focused right now on trying to reform our tax code.” Speier, herself, cast doubt on any movement before the end of the year, noting how much Congress has to address before it leaves for the holidays in just a few weeks.

But she and her cosponsors insisted that their colleagues should welcome increased transparency about harassment, even if it’s going on in their offices. “How we would handle an employee if they were mistreated … speaks to the character and integrity of how we would operate our offices,” Republican Rep. Ryan Costello of Pennsylvania said Wednesday. “I think all of our constituents will want to know that we take that obligation seriously.”