by Matthew Boyle, published on Breitbart, on Febuary 18, 2017 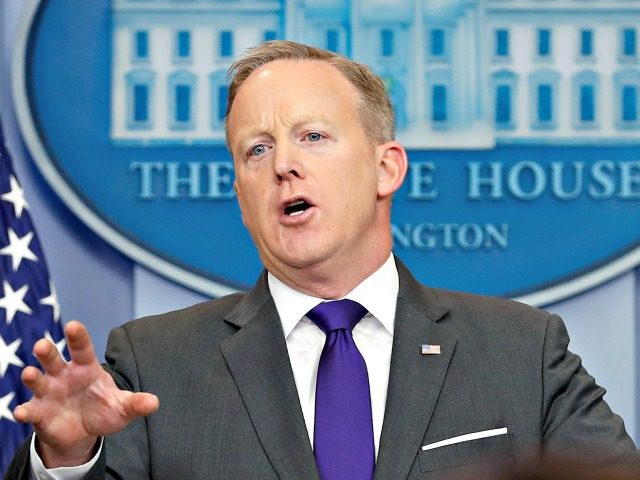 Spicer said on the show:

I think the president, after almost a month in office has, done so many things to help move the country forward—create jobs, secure the nation—and I think so many times the filter of the mainstream media loses sight of both what he’s done, accomplished, and intended to do. And I think he wants to make sure that the people who are out there who supported him, that are fighting for him and that are praying for him, know that he can talk directly to them and he can get out there and have an unfiltered conversation with them. And this is going to be a great opportunity here in Melbourne, Florida, at 5 o’clock to have that conversation with the American people so he can talk to them about all of the things he’s already done in 30 days to move the country forward.

Spicer continued by noting that people in Washington, D.C., and some in New York City—those along the so-called “Acela Corridor” that’s largely out of touch with the rest of America—“miss” what is happening. He said:

I think people who are caught up in Washington, D.C., or to some extent New York City, I think they miss what’s going on here: A successful businessman went out and got into politics and has laid out a vision for America and then has actually came to Washington and did it. And there’s like a bunch of people melting down and having their minds blown by the fact that a guy is actually keeping his word and doing exactly what he said to the American people. And not just doing it, but successfully doing it, and I think that that really sort of defies the narrative about what’s supposed to happen for a lot of these individuals. I’ll tell you, we were in South Carolina yesterday at Boeing and there were 5,000 individuals there cheering on the new 787 Dreamliner that Boeing has created—and in doing so not just that but created thousands of jobs in South Carolina to support it. It was amazing to see their support for the president and his agenda. And then down here in Florida where we are for the weekend, it’s similar. It’s refreshing to get outside of Washington, D.C., and talk to people on the street or in a convenience store who just say, ‘Hey, I really appreciate everything you’re doing, I’m standing with the president, I support everything—his agenda—and don’t get down.’ It really is reassuring to his team and to him to know that when you get outside of Washington there’s just so much support for somebody keeping his word and moving the country forward.

Spicer called out several establishment media outlets, including the Associated Press and CBS News. The AP printed fake news this week, claiming inaccurately that the Trump administration was activating the National Guard to round up and remove illegal aliens. That is not true. CBS News also reported inaccurately that Trump’s designee to serve as Secretary of the Navy, Philip Bilden, is going to withdraw from serving. Spicer noted that he spoke with Bilden and that the CBS report is simply untrue. He also called out inaccurate reporting media-wide about National Security Adviser possibility, retired Vice Admiral Bob Harward’s, reasoning for turning down the job. Spicer said:

It’s not just that, although I share your concern with that story, but I also think that just today I had someone tell me that our Secretary of the Navy was stepping down—from CBS News—I called him, Phil Bilden, he’s an amazing individual, and he says ‘I’m 100 percent committed, where is this coming from?’ Yesterday, these stories about Admiral Harward, a really dedicated public servant who retired after 40 years in the Navy. He had some personal and financial obstacles in the way that didn’t allow him to further his discussions with the president and he said ‘you know what, Mr. President, you have an amazing team. I’d be glad to be part of it, give me some time to get my family situation and financial situation straightened out after 40 years of serving this country in the Navy, and I’d love to do something in your administration.’ Yet, you read the mainstream media and they say, ‘Oh he didn’t accept it because of this’—he basically stopped the process and said, ‘I can’t go any further because of these objections, but I can’t believe what an amazing national security team you have. I’d love to be part of it in a year or two once I straighten some of this stuff out.’ Yet the reporting is quite the opposite. And it’s always, Matt, the thing that troubles me is if I say it or the President of the United States says it, it’s well, ‘We got two blind sources that say the opposite.’ At some point, it’s amazing they won’t take the president’s word, but they will take two blind sources about what the president’s word is.

Spicer said that outside the media the administration is seeing widespread support, even among former opponents—and that the president is not “holding grudges.” He went on:

Well I think there’s two groups of people—there are groups of people who truly do want to see the country succeed regardless of who they voted for. And then there are some people who are against him and are now for him based on the success he’s having. Frankly, at the end of the day, I’ll take anybody. If you were a fierce opponent of the president, but you like his agenda now that you’re seeing the vision that he has, we need to grow not subtract from people who want to support his agenda and move this country forward. The president talks all the time about unifying this country and bringing people together. One of the individuals who was one of the leading ‘Never Trump’ members of the movement, Paul Singer, was in the Oval Office right before the press conference and he basically said, ‘You know, Mr. President, you won and I want to be supportive of your agenda. And Mr. President, I embrace that.’ He’s not holding grudges. He wants to bring people together. He wants to move the country forward. And he understands that the more unified we are, the more we can enact policies that lift up people and get them to work.

But he also said there are many people in the media who presume automatically that President Trump is doing something is a negative. Spicer said:

But I think, frankly, to get to the point of your question Matt, that there are a lot of folks in the media—and I said this a couple times at the podium—the presumption is always negative. It’s ‘No matter what he does, it can’t be for the right reasons. It can’t be successful.’ It’s amazing how if you literally stripped the name from some of the words of his speeches or some of the words from Obama or Bush or Clinton rather, you could almost say the exact same thing, but the second you put his name attached to the quote it’s ‘Well, that was a negative statement because he said it—not because of the words.’ That’s what I find amazing—there’s this presumptive negativity in everything he does and says.