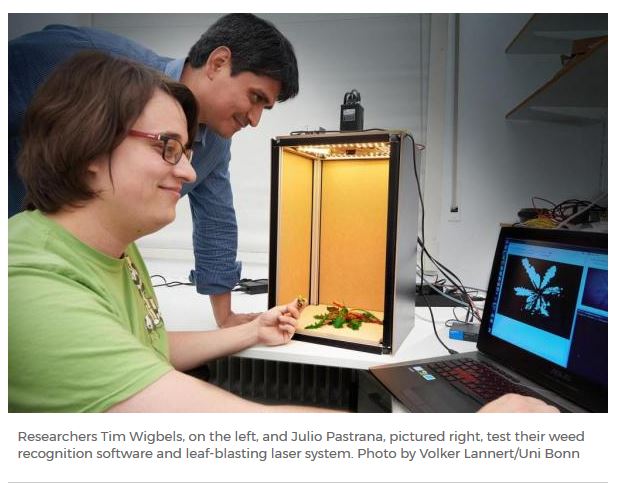 June 8 (UPI) — In a quest to become heroes to yard workers everywhere, a team of German researchers are developing a laser gun to kill weeds.

In reality, the new laser system is unlikely to be coming to a yard near you. But it could prove a boon to farmers and the environment.

The system’s promising ability relies on robotic software, which is being tested and improved by computer scientists at the Institute of Geodesy and Geoinformation at the University of Bonn in Germany. Researchers hope a combination of deep learning algorithms and cameras will allow the robot to identify unwanted weeds in a farmer’s fields and blast them with a laser.

“The robot shoots the leaves of the unwanted plants with short laser pulses, which causes a weakening in their vitality,” researcher Julio Pastrana said in a news release.

“It is thus predicted that we will no longer need to use herbicides on our fields and the environment will be protected,” said scientist Tim Wigbels.

The laser system could be mounted on autonomous all-terrain rover or configured as a tractor add-on.

As the scientists perfect the technology, they’re also working on turning their research into a new start-up business.

“It is now a case of finding investors and further developing the business plan for the startup,” said Wigbels.

Rüdiger Wolf, who advises scientists on taking their work to market, believes the technology has legitimate commercial potential.

“Our aim is to contribute to achieving more sustainable agriculture,” Pastrana said.