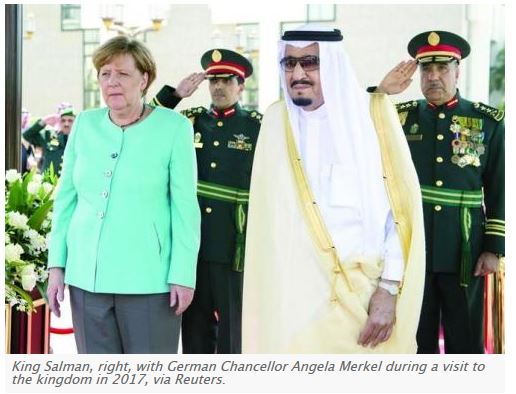 Well this is going to hurt: Der Spiegel reports that Saudi Crown Prince Mohammed bin Salman has ordered that all government contracts cease being awarded to German companies in what’s being interpreted as an aggressive punitive measure after a year of already deteriorating Saudi-German relations and as Germany has expressed its plan to stick by the Iran nuclear deal.

Der Spiegel cites companies with long-term partnerships inside Saudi Arabia as already being impacted; however, there’s still little clear confirmation on how far reaching the move will be: “Citing no sources, it said the move was likely to hit major companies such as Siemens, Bayer and Boehringer Ingelheim as well as carmaker Daimler,”according to Reuters, citing the Der Spiegel report published late Friday.

Germany generated 2017 exports worth 6.6 billion euros ($7.7 billion), according to official German figures, and is deeply invested in multiple major Saudi infrastructural projects, as Der Spiegal explains, “Some 800 German companies are active in the country, and 200 have offices in Saudi Arabia with a total of 40,000 employees,” which could be severely impacted, depending on how far the Saudis are willing to go.

This includes German mega-conglomerate Siemens which just signed a contract worth around $400 million to deliver five gas turbines for a new Saudi power plant, and Daimler, which secured an order to supply 600 Mercedes‑Benz Citaro buses from Saudi bus operator SAPTCO.

German sources privy to the Saudis’ opaque maneuvering say the situation is dire, as Reuters relates:

“For Germans, the doors in Riyadh have suddenly been closed,” says one experienced businessman in the Saudi capital. Meetings with delegations from Germany that were set up before the crisis are being canceled. “That hurts,” says Oliver Oehms of the German-Saudi Arabian Liaison Office for Economic Affairs in Riyadh.

And it appears the healthcare sector has already been feeling the pressure:

A senior German businessman in Saudi Arabia, who asked to remain anonymous, told Reuters on Friday that especially the healthcare sector was currently feeling added scrutiny when applying for Saudi tenders.

“They have even been asking: Where are the products coming from? Are they made in Germany? Do you have other manufacturing sites? And as soon as this is made in Germany, they have been rejecting any German applications for tender,” the person said.

There are significant rumors suggesting MbS is acting out of personal malice and vindictiveness toward Germany. Relations between the two countries become strained after a series of critical remarks by German officials over Saudi Arabia’s overreach in Lebanese politics — where last November’s Hariri affair left German leaders generally faulting MbS for kidnapping the Lebanese prime minister and holding him against his will.

At that time then-Foreign Minister Sigmar Gabriel had criticized the Saudis for spreading “political adventurism” in the Middle East, causing the Saudis to withdraw their ambassador to Germany, who still hasn’t returned.

It further appears this could be the first major economic blow to European countries not willing to stand by Trump’s decision to pull the US from the JCPOA. Shortly after President Trump announced the US pull-out, Iran’s President Rouhani promised that his country would continue abiding by its terms only if Iranian businesses could continue operating normally in their dealings with EU countries.

The Iranians quickly got reassurance from the E.U. energy chief, who announced last week that Europe would continue to honor the 2015 Iran nuclear agreement. And speaking at a news conference after an emergency meeting of EU leaders in Bulgaria in response to US posturing, European Commission President Jean-Claude Juncker declared proactive measures “to allow the European Investment Bank to facilitate European companies’ investment in Iran. The Commission itself will maintain its cooperation will Iran.”

Some analysts have suggested that Iran can possibly survive the newly unveiled US sanctions regimen  — which Secretary of State Pompeo this week called so pervasive that Iran will struggle to “keep its economy alive” — should sizable EU trading partners like Germany and France resist US pressures and create alternative means of bypassing US hurdles. Britain has also signaled its desire to stay the course even after threats of US backlash.

However, Tehran’s leadership itself acknowledged this week that EU cooperation is not enough: “With the withdrawal of America… the European political support for the accord is not sufficient,” Iranian Foreign Minister Mohammad Javad Zarif told Miguel Arias Canete, EU commissioner for energy and climate, during a meeting in Tehran.

As @realDonaldTrump said, US sanctions will target critical sectors of Iran’s economy. German companies doing business in Iran should wind down operations immediately.

The U.S. Treasury will reportedly target Iran’s oil industry and its central bank particularly when it re-imposes sanctions after a 90 or 180-day wind-down period, to be determined by the sector in question.

Perhaps most interesting about Friday’s bombshell Der Spiegel report is that MbS seems to be acting out of a sense of personal malice and vindictiveness toward Germany.

According to the report, citing the German-Saudi Arabian Liaison Office for Economic Affairs in Riyadh, “Young crown prince Mohammed bin Salman, known as MBS for short, appears to be “deeply offended” by the German government, says Daues, who adds that his information comes from confidants in Riyadh.”

And concerning the prior German-Saudi fallout stemming from then-Foreign Minister Sigmar Gabriel’s comments of Saudi “foreign adventurism,” Der Spiegal cites a source within the royal family:

Blunt public criticism of that nature is considered a no-no in the world of diplomacy. “Why didn’t Gabriel pick up the phone and call Riyadh if he was concerned,” asks one influential member of the royal family during a meeting a in Riyadh.

Within the palace, the impression was that the remarks made on Nov. 16 were a cheap shot by the German foreign minister to drum up support among voters, the royal family member says, adding that the prince was not happy.

Should the Saudis follow through in playing US lapdog and mediator when it comes to pressuring EU withdrawal from trade and economic ties with Iran, especially in the multi-billion dollar energy and banking sector which the US hopes to decimate, could this be the tipping point for Germany, France and Britain which makes salvaging the JCPOA too costly?

The fallout from Trump’s “with us or against us” ultimatum — the awaited “sanctions battle” — has begun.