BZ: This is a “trial Balloon” Dot, its a strategically placed point of information to gauge reactions of people in possible ways for all of this to come out and be handled. 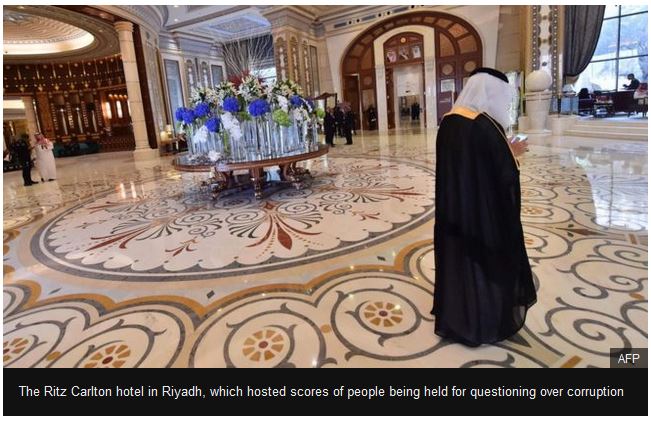 Most of those detained in a sweeping anti-corruption drive in Saudi Arabia have agreed settlements with the authorities in exchange for a pardon, the attorney general says.

Prominent figures, including princes, ministers and businessmen, were taken into custody last month.

A statement said that 320 people have been called in for questioning while 159 are currently being detained.

Those who denied the allegations or refused settlements face prosecution.

The names of those held has still not been made public, but last week Prince Miteb bin Abdullah, who was once seen as a contender to the throne, was released after agreeing an “acceptable settlement” with authorities of more than $1bn (£750m).

The nature of the charges also remains unclear but the attorney general’s statement said “internationally applied procedures” had been followed. Detainees have been held in a luxury hotel in the capital Riyadh.

Prince Mohammed, who at 32 is heir apparent, heads the anti-corruption committee and is the Saudi defence minister, told the New York Times many of those detained had already pledged allegiance to him.

Many ordinary Saudis have welcomed the move to tackle corruption with the hope that some of their nation’s oil wealth will be redistributed to the general population.