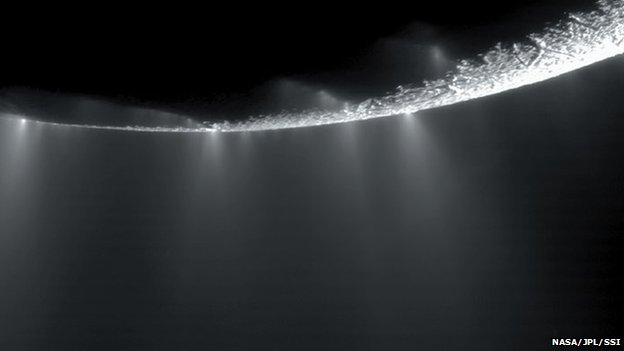 The evidence for an “ocean” of water under the surface of Saturn’s moon Enceladus appears to be overwhelming.

Now, exquisite measurements using Nasa’s Cassini probe as it flew over the moon have allowed researchers to detect the water’s gravitational signal.

“The measurements that we have done are consistent with the existence of a large water reservoir about the size (volume) of Lake Superior in North America,” Prof Luciano Iess told BBC News.

A European comparison would be 245 times the water mass of Lake Garda in Italy.

The findings of Prof Iess and his team will boost the view that the 500km-wide moon would be one of the best places beyond Earth to go look for the existence of microbial life.

This would put it directly on top of the moon’s layered, rocky interior.

The case for a subglacial ocean has been growing ever since Cassini first sensed a diffuse atmosphere at the moon in 2005.

Subsequent observations pinned the source of this atmosphere to mineral-rich streams of water vapour flowing away from surface fractures dubbed “tiger stripes” for their resemblance to the markings on a big cat.

Cassini even flew through the plumes to “taste” their load of salts and organic (carbon-rich) molecules.

Enceladus’s orbit around Saturn is eccentric – it is non circular. The giant planet’s gravity should therefore be expected to squeeze and stretch the little moon as it travels this path, heating some of its ices and melting them.

Some of the resulting liquid could then be hurled into space through the deep tiger fractures, although quite how this happens is not yet fully understood.

It has involved measuring tiny changes in the speed of Cassini as it passed through Enceladus’s own gravitational field.

These changes in velocity were as small as 20 millionths of a metre per second.

They enabled Prof Iess and colleagues to map variations in the distribution of mass on the moon.

The large anomaly they spotted in the data at the southern pole is best explained by the presence of a big volume of water.

“What we see is consistent with a water pocket of about 8-10km in depth, and this pocket can extend up to southern latitudes of 50 degrees around the pole,” the Sapienza University of Rome researcher explained.

There is strong evidence to suspect the existence of sub-glacial oceans at a number of Solar System moons.

Saturn’s largest satellite, Titan, probably has one. Similarly, the Jupiter moons Europa, Ganymede and Callisto would fall into this class; and perhaps even Triton at Neptune.

Of these, Enceladus and Europa draw the most interest because it is more likely that their water would be in contact with rock.

This could make for some interesting chemistry – the sort of reactions that might facilitate the emergence of life.

Prof Andrew Coates, of the UK’s UCL-Mullard Space Science Laboratory, commented: “I think Enceladus has gone to the top of the charts in terms of a place where there could be life.

“It’s got several of the things which you need for life – there’s certainly the presence of heat, there’s liquid water in this ocean, there’s organics and that type of chemistry going on.

“The only question is, has there been enough time for life to develop?”

Prof David Stevenson, from the California Institute of Technology, added: “We don’t have an answer to that, but there are some theoretical ideas.

“First, let me say that the ocean that we have found could keep things going for tens of millions of years, maybe 100 million years, but, of course, we don’t know whether the ocean is being added to at present or is freezing up.

“And, maybe, Enceladus does go through cycles and those cycles would be related to the eccentricity of the orbit. It’s possible that the orbit has not always had the same eccentricity.” 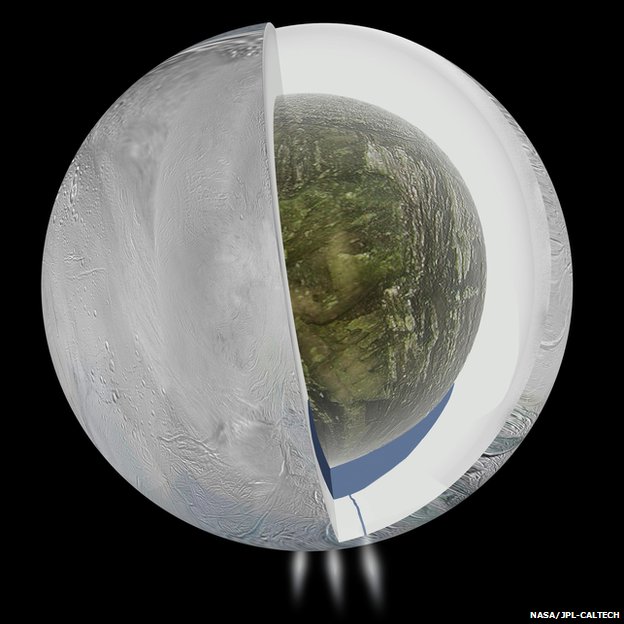