By Julian Websdale, published on Humans Are Free, on March 2017

All of the sacred sites, wherever they exist in the world, are placed on vortex points that are called “conductivity discontinuities.”

At these places the geomagnetic field of the earth interacts with the telluric currents (the magnetic flow across the face of the earth), and when the two intersect there is a certain concentrated electromagnetic field which influences the body’s own energy field.

This is what stimulates our states of consciousness when we’re at these sacred sites.

A lot of ancient texts including the Indian Puranas and the ancient Egyptian building texts, have the same commonalities, which talk about a time before a massive global deluge struck the earth and wiped out, what they called, “cities of knowledge”. 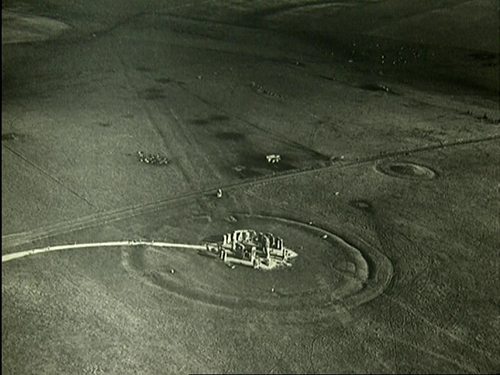 These cities of knowledge have now been found, in part of the myths that have been written about them and by people like Graham Hancock, who has found that there are indeed enormous cities 120 feet below sea level.

Sacred temples around the world had inscriptions that talk about the places as being fundamental to transforming a person into a god or bright star. This wasn’t so much a physiological change as it was a shift in one’s state of mind.

The whole purpose was to have a shamanic experience whereby for a few minutes, or, if you were able to stand it, for a few hours, you were able to release yourself from your body – part of your soul or subconscious was able to transcend the physical world and somehow connect with an astral reference library.

It would very much depend on the questions you took with you into these places, as to what answers you received, and they were very specific for each individual person.

The whole purpose was to find out, from this reference library, information that would help you to live your life more purposefully in this world.

Once you had access to the knowledge, which was known as the “knowledge of the gods”, you could use it in a number of ways, here on earth, in practical ways, to bring about self-empowerment.

The more knowledge you had at your disposal, the less subservient you were to others who had been trying to control you.

These experiences are about taking a certain degree of control of your own life through the process of self-realization, which allows you have more conscious control over the way you live, enabling you live your life with more awareness.

This has been the primary motivation behind most of the mystery schools, all the way to the Freemasons, for thousands of years.

These sacred sites were built to last into our time. They were built to remind us of a time when we were much more connected, on a bigger scheme, not just to the earth and nature, but the whole cosmos – these places also measure the movements of the skies.

Ley lines are geometric alignments between sacred sites. These energy lines, also referred to as “serpent lines” or the telluric currents, don’t actually have any energy by themselves, but transmit and receive the energies present around the globe.

All the sacred sites on the face of the earth, without exception, are aligned on the crossing paths of the earth’s telluric currents, the magnetic lines of energy that flow across the earth’s surface.

The reason why the ancients sourced these vortex points is because they have a direct influence physiologically on the body.

The magnetism present at these sites will start moving all the iron which flows in the blood of the human body.

It is also going to affect the magnetite present in every person’s skull, thus re-orientating all the magnetite and enabling an altered state of imagination.

So when you go to these sacred places and you experience visions or start dreaming, you should pay attention because an interaction between the invisible (metaphysical) universe and your body may be taking place.

So these places were set up for us to have a such experiences.

The purpose of sacred sites was to improve one’s ability to get out of the left-brain, and into the right-brain – the more intuitive side.

The ancients recognized that you’re on a journey of experience, and the lighter your body becomes during this experience, the better you are at managing self-control.

The more psychic or intuitive you become, the more aware you are of the life around you. You can become precognisant of future events and prepare ahead of time for certain events which may not be beneficial to you.

You have a degree of control over your life, and that’s the reason these sacred sites were built – so you don’t have to rely on other people to tell you what to do. You are in total control.

About the author: Julian Websdale is an independent researcher in the fields of esoteric science and metaphysics, and a self-initiate of the Western Esoteric Tradition. His interest in these subjects began in 1988. Julian is an author on HumansAreFree.com and you can visit his personal blog here.