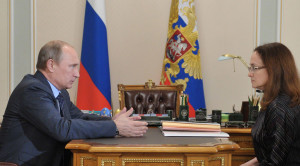 Russia is ready for the mass issue of national payment cards next year, as it seeks to detach from the Western-dominated financial system and distance itself from geopolitical risks, said the head of the Central Bank at a meeting with the president.

Twenty banks have already confirmed their attendance in a pilot issuance planned for December, said Elvira Nabiullina Monday at the meeting with Vladimir Putin to report the results of the Russian banking sector in the first half 2015.

The Mir payment system, launched in 2014 and branded in 2015, will have to conquer the 230 million-card Russian market.

READ MORE: Russia should move to the national payment card this year – Putin

“This is a card that works as a national payment card, Mir, in Russia, but at the same time it can work abroad as a MasterCard, American Express etc. – so that people will feel comfortable and not worry if they want to buy something abroad or to travel somewhere,” Nabiullina said.

The first step was made when an operational and clearing center was set up. Domestic operations made using international payment systems are now processed in this center, she added.

The Russian National Payment Card System (NPCS) announced the issuance of co-badging cards with JCB of Japan in July. The card will work as Nabiullina described – as a Mir card in Russia and JCB abroad.

Another stepping stone to becoming more economically independent – a national rating agency – was also discussed at the meeting.

Putin backed the agency, launched in July by the CBR board of directors.

“I remember our discussion with the European Commission’s former executives, how they resented the actions of our American partners, saying that the assessments from international (read as American) rating agencies, are not objective,” said Putin.

he Russian rating agency is expected to start work in the fourth quarter of 2015, the Central Bank of Russia (CBR) said, adding that its initial capital would be at about $52 million (3 bilion rubles).

“… credit rating agencies are one of the most important elements of the financial market infrastructure. Their activities must be stable to various factors, including geopolitical risks,” the CBR said in a statement Friday.

“Russian market needs a strong credit rating agency with a high level of corporate governance and professional competence,” the statement said. It added that the new agency will have to meet the interests of the economy and have a good reputation for both Russian and foreign investors.

The agency will be headed by Ekaterina Trofimova, the vice president of major Russian state-owned bank Gazprombank. The lender says Trofimova will stay with Gazprombank despite her new appointment.

The agency plans to become self-funding in the next 3-5 years and enter foreign markets in the future, according to Trofimova. A pool of investors has developed and applications will be accepted from next week.

“At the initial stage, the agency will work in the Russian domestic market, but plans to gradually enter other markets, firstly the Eurasian Economic Union,” she said.

The question of cooperation with China’s Dagong rating agency was not discussed, she added.

Nabiullina said the project would be market-regulated, without the Central Bank’s financial participation. The agency’s initial capital would be at about $52 million. Each participant’s share will be no more than 5 percent so that no kingpin can dominate its policy. The agency is expected to make its first assessments in the middle of the next year, she added.

The CBR has denied earlier reports it would be a shareholder in the new national rating agency, saying it would be against federal law.

Companies wishing to have a share in the agency have apply by August 28, says the head of Rosbank Dmitry Olyunin. The list of founding shareholders is not closed, he added.

The head of Russia’s smaller lender Binbank, Mikhail Shishkhanov, who took part in a CBR meeting Friday, said each founder of the national rating agency will receive no more than a 5 percent stake.

Russia’s second largest bank VTB and one of the country’s biggest insurers Rosgosstrakh said they would take part in establishing the new rating agency.

Earlier TASS reported the agency could have more than 20 stakeholders.

Currently Russia has a number of local rating agencies that are not internationally recognized. The list includes RusRating, Expert RA, the National rating agency and AK&M.

Last Tuesday President Putin signed a law regulating the activity of ratings agencies in Russia, as discontent over ‘politicized’ actions of the Western ‘Big Three’ – S&P, Moody’s and Fitch – has grown.

The BRICS countries are also discussing setting up a rating agency. Russia and China planned to launch a new Universal Credit Rating Group (UCRG) in 2015, but market participants said talks have stumbled due to political reasons.