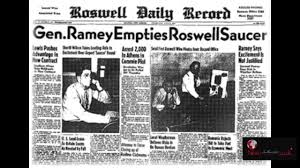 BZ:The full transcript of the Roswell alien interview is being blocked from html viewing, you can directly download by putting this link

https://i-uv.com/wp-content/uploads/2017/01/Roswell-MacElroy1.pdf  in your browser for the raw file.

On July 7, 1947, an object crash landed on a ranch, approximately 75 miles northwest of Roswell, leaving a large field of debris. The local air base at Roswell investigated after the rancher first reported it to Roswell authorities on July 7. On July 8, the Roswell Army Air Field (RAAF) announced it had recovered a “flying disk”. A few hours after the initial “flying disk” press release, U.S. Army Air Force officials stated that it was not a UFO, but a weather balloon. When the question of what crashed was revived in the early 1980s, the “Roswell Incident” became a focus of conspiracy theorists, “abductees,” and UFO investigators. It is believed the crashed UFO’s were used for reverse engineering, explaining the rapid advancement in technology since that time.
http://www.crystalinks.com/roswell.html