Romania protesters not backing down after decree repeal

Romania protesters not backing down after decree repeal

About 500,000 demonstrators have rallied across Romania, despite the government revoking a controversial decree that fuelled their discontent.

The left-wing government earlier scrapped the decree, which would have shielded many politicians from prosecution for corruption.

But protesters remain dissatisfied about a revised version of the bill which will now be put to parliament.

Some are calling for the government of PM Sorin Grindeanu to resign.

The decision to repeal the degree was confirmed at an emergency government meeting in the capital Bucharest on Sunday.

But protesters expressed concerns about the government’s plans to redraft the law and send it for debate in parliament, where it could be forced through.

Huge crowds swelled in the capital’s Victory Square for a sixth day in a row. 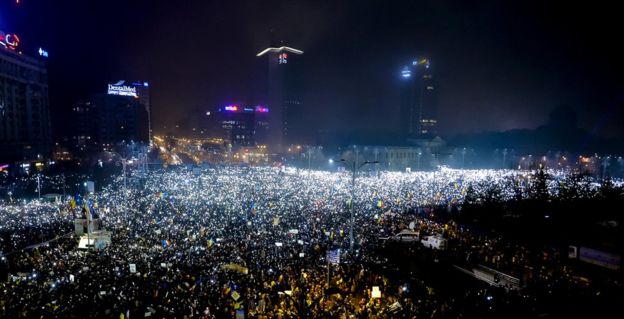 A giant laser beamed the words “Do Not Give Up” and “Resignation” on to the government building housing the prime minister’s office.

“This government is organised from the high level to the low like a mafia, and we don’t want something like this,” one protester, Profira Popo, told the Associated Press news agency.

No calm after the storm, by BBC’s Nick Thorpe in Bucharest

Sunday night’s demonstration in Bucharest was planned as the climax of the protest movement.

The government hoped that by scrapping the decree, calm would return to the streets of the country – but that hasn’t happened yet.

Many in the crowd don’t trust the government to keep to its word.

They are afraid that new legislation, promised by the prime minister when he abolished the decree, might contain some of the same elements in a different form.

Critics saw it as an attempt by the government to let off many of its own officials caught in an anti-corruption drive.

The government had argued that the changes were needed to reduce prison overcrowding and align certain laws with the constitution.

One immediate beneficiary would have been Liviu Dragnea, who leads the governing Social Democratic Party and faces charges of defrauding the state of €24,000.

The decree was originally passed on Tuesday and was due to come into effect on 10 February.

The constitutional court has still to rule, later this week, on the legality of the original decree.