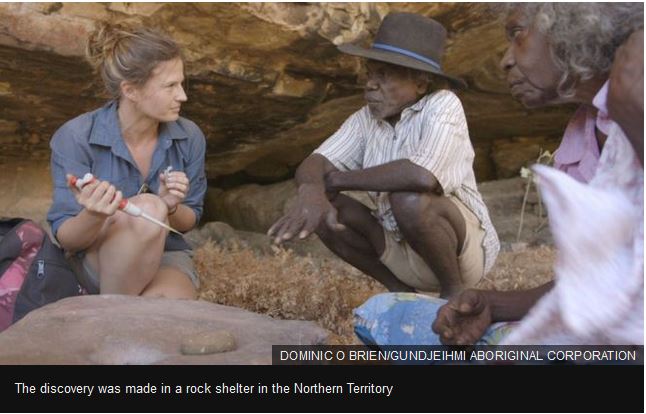 Archaeologists have found the first evidence to suggest that Aboriginal people have been in Australia for at least 65,000 years.

The discovery indicates their arrival on the continent was up to 18,000 years earlier than previously thought.

It was made after sophisticated artefacts were excavated from a rock shelter in the Northern Territory.

Researchers unearthed what they say are the world’s oldest stone axes and ochre crayons, thought to be used for art.

Although there is some debate, scientists have previously estimated that humans arrived in Australia between 47,000 and 60,000 years ago.

“We have managed to establish a new age for first occupation in Australia and pushed it back by about 18,000 years beyond what was the previous established age of about 47,000 years,” said Associate Prof Chris Clarkson, from the University of Queensland.

“This has huge implications for everything from the out-of-Africa story to the extinction of megafauna and Aboriginal peoples’ own knowledge of how long they have been in this country.” 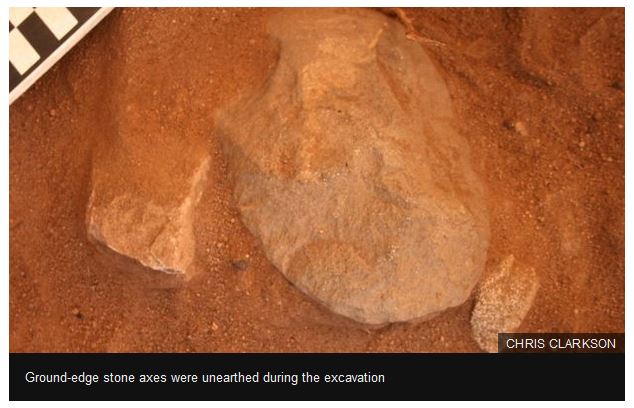 Associate Prof Clarkson said the discovery, published in the journal Nature, provides insight into human chronology, but he acknowledged the new dates are at odds with previous genetic research findings.

The rare artefacts found in the dense lowest layer of the Madjedbebe shelter, near Kakadu National Park, indicate an “innovative and dynamic early Aboriginal occupation of Australia”, Assoc Prof Clarkson told the BBC.

“We found these beautiful ground stone-edge axes with grooves at one end where the handle would have been attached with resin,” he said.

The team found pieces of reflective art minerals such as mica wrapped around ground ochre, along with a slab covered in red ochre that was mixed with mica.

“It really tells us that people were heavily into artistic activity,” Associate Prof Clarkson said. 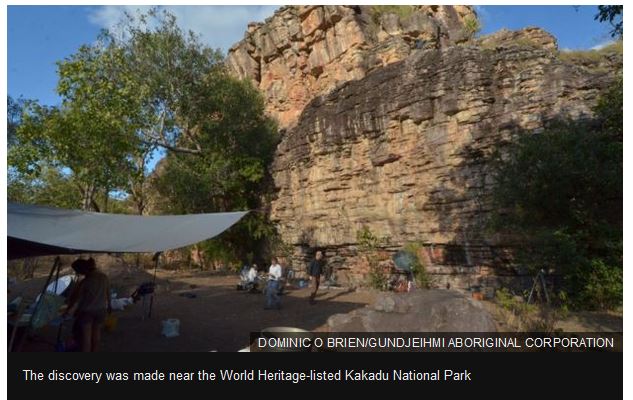 Since the 1970s, the Northern Territory rock shelter has been excavated four times, with more than 10,000 artefacts found in the lowest layer of the site.

For the latest digs, researchers struck a landmark agreement with the Gundjeihmi Aboriginal Corporation, which represents the traditional owners of the area, the Mirrar people.

Mirrar people worked alongside archaeologists at Madjedbebe, helping with the excavation and curation of the material.