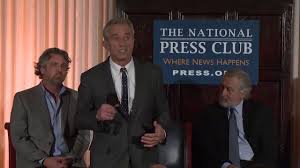 Robert F. Kennedy Jr., Chairman of the World Mercury Project (WMP), announced a $100,000 challenge today aimed at putting an end to including mercury, a neurotoxin that is 100 times more poisonous than lead, in vaccines administered in the U.S and globally. [This version has a blackout at 3:36–6:06. See edited version at https://youtu.be/DqWhzKewILk]