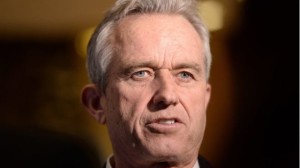 Mr Kennedy has questioned whether vaccines cause autism, a claim that has been widely debunked by medical professionals

Robert Kennedy, Jr. “All the things that I do are bent on forcing this [vaccine] debate out into the open—because once the science is in the open, the CDC’s position is so fragile, it’s an edifice of fraud, fraud stacked upon fraud, so high and so wobbly, that even a slight breeze of public scrutiny will topple it.”

Kennedy states that President Trump has appointed him to head up a task force investigating vaccine safety. The above quote indicates Kennedy, would, if given the green light, probe much more than the use of mercury in vaccines—his main topic of interest thus far.

This would be a very good thing. The CDC is most certainly an edifice of fraud. It has concealed many of its crimes over the years.

If he hasn’t already, Kennedy should make contact with an anonymous group of scientists at the CDC who call themselves ‘Spider’. They have written a letter to the CDC chief of staff accusing the agency of widespread “unethical practices…influenced and shaped by outside parties…[that] threaten to undermine our credibility and reputation as a trusted leader in public health.” (More on Spider here.)

In my recent open letter to Spider, I presented three shocking areas of fraud at the CDC that they should expose:

A structural conflict of interest, in which the CDC buys billions of dollars of vaccines and, at the same time, carries out many studies assessing vaccine safety—with this much money on the line, the Agency would never, under any circumstances, admit vaccines are dangerous;

A massive overestimation of annual flu deaths in the US, in order to push the necessity of the flu vaccine.

In this second memo, I present two more shocking areas which should receive the immediate attention of the dissident Spider scientists at the CDC, and Mr. Kennedy:

ONE: THE CASE OF JULIE GERBERDING.

On August 27, 2014, CDC scientist William Thompson came out of the shadows and revealed that he had participated in a major scientific fraud:

Ten years earlier, he and his co-authors had published a study claiming there was no MMR-vaccine connection to autism. They had omitted vital data which contradicted that finding.

The MMR vaccine was increasing the risk of autism. Thompson knew it. So did his co-authors. They buried that chilling fact.

Before their fake study was published, Thompson wrote to the head of the CDC, Julie Gerberding, informing her that, at an upcoming conference, he would be “presenting the summary of our results from the Metropolitan Atlanta Autism Case-Control Study [and]…I will have to present several problematic results relating to statistical associations between the receipt of MMR vaccine and autism.”

In other words, Thompson was ready to blow the whistle on the MMR vaccine-autism connection. He received no reply from CDC Director Gerberding, and his presentation at the conference was canceled.

She eventually went to work as the president of the vaccine division at Merck.

Get it? (full story here)

TWO: OVERWHELMINGLY, FLU IS NOT FLU. THEREFORE, EVEN PEOPLE WHO BELIEVE IN THE IMPORTANCE OF THE FLU VACCINE ARE BEING DECEIVED.

As Doshi states, every year, hundreds of thousands of respiratory samples are taken from flu patients in the US and tested in labs. Here is the kicker: only a small percentage of these samples show the presence of a flu virus.

This means: most of the people in America who are diagnosed by doctors with the flu have no flu virus in their bodies.

So they don’t have the flu.

Therefore, even if you assume the flu vaccine is useful and safe, it couldn’t possibly prevent all those “flu cases” that aren’t flu cases.

The vaccine isn’t designed to prevent fake flu, unless pigs can fly.

“…even the ideal influenza vaccine, matched perfectly to circulating strains of wild influenza and capable of stopping all influenza viruses, can only deal with a small part of the ‘flu’ problem because most ‘flu’ appears to have nothing to do with influenza. Every year, hundreds of thousands of respiratory specimens are tested across the US. Of those tested, on average 16% are found to be influenza positive.

“…It’s no wonder so many people feel that ‘flu shots’ don’t work: for most flus, they can’t.”

Because most diagnosed cases of the flu aren’t the flu.

So even if you’re a true believer in mainstream vaccine theory, you’re on the short end of the stick here. They’re conning your socks off. The CDC is supposed to be doing an accurate count of case numbers of diseases in the US. They’re lying and covering up the facts.

—Those of you in the Spider group of rebel scientists at the CDC, get busy. There are many more instances of massive corruption at your Agency. Dig in. Don’t let the American people down.

Go all the way.