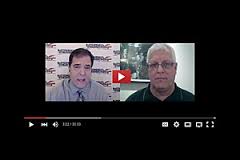 Macroeconomic analyst Rob Kirby explains the violent moves in the markets by saying, “We really do not have markets anymore. We have interventions, and we have massive fraud committed on a daily basis in what we call our capital markets. Our capital markets have become nothing more than a crime scene.”
Look no further than the gold market on election night. The stock market was 800 points down in the red, and gold was way up in the black. All that reversed in a matter of a few days. How did the powers pull off a stunning reversal, especially with the skyrocketing price of gold? Kirby says, “It was roughly 8,000 metric tons from late election night through Friday. It’s up in the area of three years of global production in the paper markets in the space of three days. . . . It’s a staggering amount, and the old saying goes if something is too good to be true, it isn’t true. It is too big of a story to believe that there exists 8,000 tons of gold to sell because there clearly isn’t.”

Join Greg Hunter as he goes One-on-One with Rob Kirby of KirbyAnalytics.com.

All links can be found on USAWatchdog.com: http://usawatchdog.com/globalists-wil…