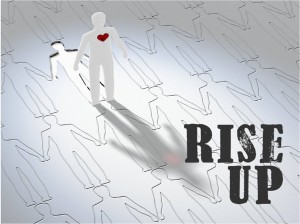 It is time for humanity to rise up.

If I see another “petition” asking for the selected “powers that shouldn’t be” to do this or that I’m gonna spit nails. It’s ridiculous. The very positioning of the populace into a place of “petitioning” others to get things done only reinforces the matrix of control and deceit.

The answer is to rise up.

This is done individually most of all, and collectively as a result. The PTSBs are parasitic fleas on the back of humanity trying to direct the movements and mind set of the body. It’s insane. This comes into perspective when you realize you are the creator of the reality around you. It’s an immense realization and empowerment awaiting any truth seeker.

We are what we project, and we project what we perceive. If the importance of awakening can be encapsulated into anything it’s that. If that seems too esoteric for you then dig deeper and wake yourself up. Without awakening we are swimming in a futile state of induced cause and effect within carefully circumscribed limits.

It’s honestly hard to believe even semi-conscious active humans still have the mindset to “ask” others to perform what needs to be done, to either bring to public discussion, pass laws or acknowledge the obvious. Just think about it. When the obvious is obvious do you need validation from some outside “authority”? What more validation do you need than your experiential facts?

This is why small subcultures existed in such harmony. What was known was known. Experiences and wise understandings were considered valid. There was a common agreement and harmonious communication, even if the evidence was sometimes subjective it was understood.

Today? It’s a legalistic nightmare. “Prove what you saw with your own eyes” or “Bring evidence that you were accosted or an offense was orchestrated” etc. The system is based on lack of trust and empathy most of all, and resigned to relegate humanity to a place of servitude to imposed law and authority by controlling interests.

Stand your ground. Be fully who you are. What you perceive once awakened is your path to full awareness. Trust it. Have confidence in what you are being shown. And stand within it.

Everything in the world society will assail such a stance but stand you must. Friends will desert, old paradigms will fold in on themselves, opposition will arise; but this is no reason to waver. Our united calm and centered confidence is what shakes the matrix to its foundations.

Being bold and brave doesn’t touch on the deeper meaning of this kind of conviction. It’s a sense of knowing that surpasses all emotional and mental calibration or judgement. It just is. And there we must stand fearlessly. There’s clearly a seeming paradox here when what you know to be true doesn’t stand up to their measurements, but stand we must.

After all, it’s reality. And no outside power source needs to confirm it. Because we know it to be true.

There are so many imposed paradigms that need to be let loose. Our apparent dependency on the system goes from our birth certificate to our income tax form; our money subservience to the educational and job treadmills. It’s all the same. To make it in the treadmill you must align with the treadmill’s system and abide by its contracts. It’s all a super imposed sham.

Do you dare to let go of it? Do you think it will make a big enough difference? Are you waiting for others to lead the way, similar to asking the current authorities for permission to act?

These are big questions.

It’s certainly not a time for cowards and curious onlookers. That’s what got us into the mess we’re in today. It’s a time for selfless doers. Or perhaps insane dreamers – not insane in the least since they have a grasp on reality but are considered as such by the status quo.

Do we have the guts to stand up? To be who we truly are? To live according to our innate convictions?

This is the challenge. Let’s rise to it.