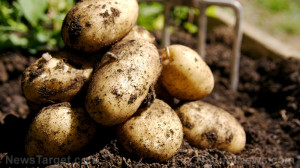 (Natural News) Researchers have discovered the earliest example of the use of potatoes in North America, and it dates back far longer than previously believed. The archaeologists found “well-preserved starch granules” in cracks in the rocks that were used to grind the potatoes up in what is being labeled the oldest evidence of potato cultivation in North America.

The potato starch was embedded in stone tools that were found in Escalante, Utah. This helps explain why early European settlers called the area “Potato Valley.” All of the potato varieties that are loved around the world descended from Solanum tuberosum tubers that are native to South America and were domesticated more than 10,000 years ago, but Solanum jamesii, also known as the Four Corners potato, is native to North America and is seen only in New Mexico, Utah and Arizona.

The potatoes are small – around the size of a silver dollar – but a single plant can yield as many as 125 of them. They are often found in the shade of sagebrush, piñon pines, and oaks and are most abundant in the New Mexico highlands. In Utah, they are only found near archeological sites, which suggests that ancient people brought the plant there.

The potato was eaten by Native American tribes such as the Navajo, Apache, Zuni, Kawaik and Hopi. They used a variety of cooking and processing methods, such as boiling, grinding them into yeast or flour, and even mixing them with clay to reduce their bitterness. This potato is believed to have played an important role in the diet of ancient humans, and it was likely transported, cultivated and domesticated.

It is believed that the Four Corners potato may prove to be the first example of domesticated plants in the American West, and it could help make current potato crops better able to resist disease and drought. This nutrient-rich potato contains twice as much protein, manganese and zinc as a standard white potato, and it boasts three times the iron and calcium.

It was discovered using the same technique that found the earliest known usage of species like oats found in the southern part of Italy that date back 32,600 years, yams and beans from China dating back around 21,000 years, and barley and wheat in Israel dating back 23,000 years.

The tools that contained the tiny starch granules were grinding stones known as manos, and traces were also found in big slabs of sandstone known as metates. Grinding the plant tissues using the metates and manos releases the granules. Some of them get stuck in the stone’s tiny cracks, where they can be preserved for thousands of years.

The archeologists can retrieve these granules with the help of microscopy, chemicals and advanced imaging. The presence of off-center hila in the starch granules tipped of the scientists to the presence of Solanum jamesii.

Their findings were published in the Proceedings of the National Academy of Science, and it’s the first archaeological study to identify spud-bearing species that are native to the U.S. southwest.

Archaeologist Lisbeth Louderback of the Natural History Museum of Utah said: “This potato could be just as important as those we eat today, not only in terms of a food plant from the past, but as a potential food source for the future.”

The researchers are encouraging the Escalante community to conserve these plants as well as their cultural heritage.