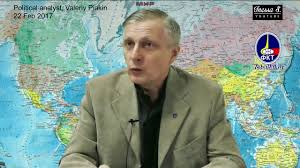 This episode is taken off political analyst’s Valeriy Piakin’s channel – his explanation of recent events confirms what many have suspected. In the past few months, an unusual amount of individuals in pro-Russian fields of work have passed away. Starting with Arsen Pavlov (Motorola), a Commander in the Donbass region, followed by Russian Ambassadors to Turkey and India; Mikhail Tolstyh (Givi) – another high ranking Commander in the Donbass, and now – Russia’s permanent representative to the UN, Vitaly Churkin. Piakin’s explanation posits that all of these individuals were victims of US intelligence operations – but why?

The intention is to remove all individuals who have something to do with the Minsk agreement, so that it can no longer realistically be implemented. The Minsk Agreement (a ceasefire, followed by elections and self-determination in Eastern Ukraine) is counterproductive to the West. To allow Minsk to happen would be to undo all of elites’ hard work to date. This is why ”not fulfilling Minsk obligations” is always pinned on Russia in Western media – despite the fact it is not party to the document, and it is the Kiev junta who shells civilians of Eastern Ukraine.

If Piakin is correct, then everyone who defends Minsk – whether on the battlefield or through the information war – have reason to be concerned for their safety. People like Zakharchenko of the Donbass, and those below him, as well as Russia’s extended diplomatic community should be highly vigilant and ramp up their security against espionage.
————————————————————————————————–
For current affairs, translations and analysis, check out http://www.Fort-Russ.com
My vids also get uploaded to the Eurasia Daily page on Facebook: https://www.facebook.com/eurasiadaily…