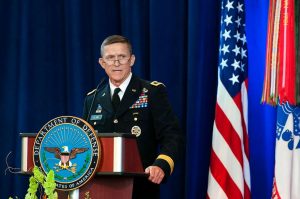 Flynn tweeted, “#WeThePeople @SidneyPowell1 @LLinWood @DanScavino @LouDobbs @MariaBartiromo @marklevinshow @lofly727 Freedom never kneels except for God,” along with a link to a statement by an Ohio-based non-profit group called “We The People Convention.”

In the We The People Convention (WTPC) press statement, the group details a full-page advertisement it bought in the Washington Times. The press statement is titled, “WTPC Calls for President to Invoke Limited Martial Law to Hold New Election and Protect our Vote, in Full Page Washington Times ad, if Legislators, Courts and Congress Do Not Follow the Constitution.”

The WTPC’s call for martial law comes as many U.S. media outlets have called the race for Democratic presidential candidate Joe Biden, but Trump continues to contest the election results. Delegations of electoral college voters from each state are expected to cast their ballots for president on Dec. 14, while Dec. 23 serves as the deadline for electors’ votes to be received.

Part of the advertisement reads, “When the legislators, courts and/or Congress fail to do their duty under the 12th Amendment, you must be ready Mr. President to immediately declare a limited form of Martial Law, and temporarily suspend the Constitution and civilian control of these federal elections, for the sole purpose of having the military oversee a national re-vote. A vote that assures a fair election in every jurisdiction and reflects the true will of the people. Federal candidates only. Paper ballots. No computers. Hand-counted with both parties watching every vote. Only registered voters. Photo ID to prove residence. Conducted safely with everyone wearing masks and six feet apart, just like we did in Ohio. Only then can the winning candidate be accepted as legitimate by a true majority of We the People who must give our consent to be justly governed!”

The WTPC also justifies the call to suspend the constitution and have the military oversee a new election by comparing the action to those made by President Abraham Lincoln. The WTPC states:

“While some debate these measures still today, no one disagrees that Lincoln and his use of Presidential power were responsible for saving the Republic,” the WTPC states. “While History, and even former President Obama, has judged Lincoln as perhaps our greatest President, few would have agreed at the time he took those actions. Then, as now, a President with courage and determination was needed to preserve the Union.”

Flynn’s tweet comes days after Trump issued him a full pardon for charges he lied to the FBI about contacts with a Russian official. Flynn did plead guilty to the charge in December 2017, but his defense team had revoked the plea, arguing the FBI sought to entrap him.

The U.S. Department of Justice moved to drop Flynn’s case in May, but District Judge Emmet Sullivan, who is overseeing Flynn’s case, rejected the dismissal. Transcripts of Flynn’s call were declassified in June and Republicans said the transcript showed Flynn hadn’t engaged in any wrongdoing, but Democrats maintained he lied when discussing his call with the FBI. Sullivan ultimately decided to prolong Flynn’s case by taking extra measures to consider the DOJ’s motion to dismiss.