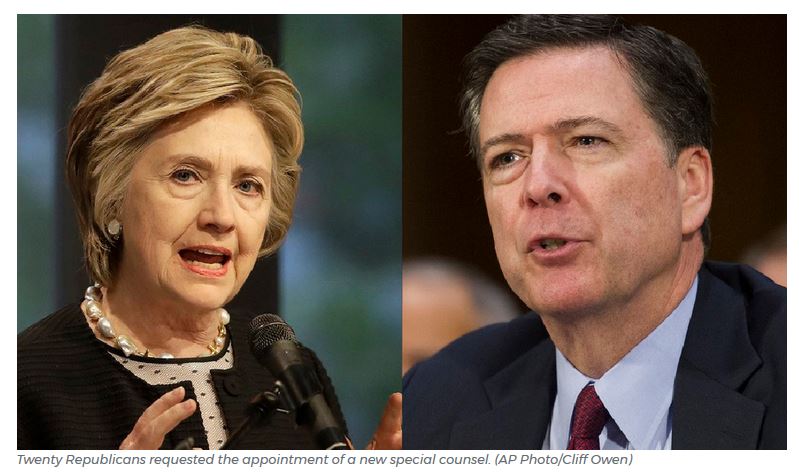 The grounds for war have been laid. You know it and I know it. The democrats have forced republicans into a small corner and have been scratching away at their fat faces since election night. For every action, there is is reaction — basic physics.

Rep. Gaetz and a few dozen other republicans are now calling for a special prosecutor to investigate the great and many crimes of the previous administration and Hillary Clinton.

“The American public has a right to know the facts – all of them – surrounding the election and its aftermath,” they wrote. “We urge you to appoint a second special counsel to ensure these troubling, unanswered questions are not relegated to the dustbin of history.”
‘I don’t think that the crimes of the prior administration, of Hillary Clinton, the collusion with James Comey and Loretta Lynch should be forgotten just because Hillary Clinton lost the election’

Here is their 14 point request.

The FBI and DOJ’s decisions in the course of the email probe, including controversial immunity deals with Clinton aide Cheryl Mills and others

Disclosures in WikiLeaks-released emails regarding the Clinton Foundation and, according to the letter, “its potentially unlawful international dealings”

Connections between Clinton officials and “foreign entities” including Russia and Ukraine

The FBI’s “reliance” on controversial firm Fusion GPS, which was involved in the questionable anti-Trump “dossier”

“Our call for a special counsel is not made lightly,” the lawmakers wrote. “We have no interest in engendering more bad feelings and less confidence in the process or governmental institutions by the American people. Rather, our call is made on their behalf. It is meant to determine whether the criminal prosecution of any individual is warranted based on the solemn obligation to follow the facts wherever they lead and applying the law to those facts.”

Rep. Gaetz tears into Clinton, Rice, Obama and the whole cabal — calling for an investigation into these matters.

And here is the Chair of the House Judiciary Committee, Rep. Goodlatte, discussing the hypocrisy of the left, wanting a Russian investigation but not one that pursues the truth in the sundry of apparent crimes committed by the previous administration and Hillary.

With AG Sessions under pressure to deliver, I would not be surprised to see dueling Special Counsels investigating both matters at the same time.