Report Says 50% of People are Conspiracy Theorists: You’re Probably One of Them 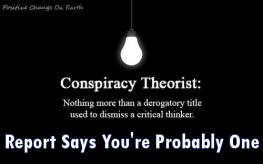 Report Says 50% of People are Conspiracy Theorists: You’re Probably One of Them

Do you believe the government actively works to suppress alternative medicine? Do you think they already know cell phones cause cancer and are simply refusing to do anything about it? Do you use nutritional supplements? If you responded yes to any of these questions, you could be the type of person that a new JAMA study paints as a simple-minded “medical conspiracy kook”.

Both the new study and the corresponding report from Reuters Health seem to look down on people like you and I (as readers of NaturalSociety), as if we don’t know any better -as if understanding medicine in the “right” way is a matter of intelligence and it’s not that we’ve come to our own ideas through research, but in an effort to make things simpler for our feeble minds.

“Science in general – medicine in particular – is complicated and cognitively challenging because you have to carry around a lot of uncertainty,” said lead author J. Eric Oliver. “To talk about epidemiology and probability theories is difficult to understand as opposed to ‘if you put this substance in your body, it’s going to be bad.’”

To come to such conclusions about a large segment of the U.S. (and global) population, Oliver and his team surveyed 1,351 adults. Participants were asked to read “six popular medical conspiracy theories” and indicate whether they have heard of them and whether or not they agreed with them.

Nearly half (49%) of participants agreed with at least one of the theories. About 37% thought the government actively works to suppress alternative medical treatments and 20% believed vaccinations cause autism.

“Although it is common to disparage adherents of conspiracy theories as a delusional fringe of paranoid cranks, our data suggest that medical conspiracy theories are widely known, broadly endorsed, and highly predictive of many common health behaviors,” reads the study in an ever-so-respectful tone.

The researchers indicate that those who believe in these “conspiracies” are more likely to take herbal supplements, clear evidence that they are idiots, the study seems to suggest.

“For people who don’t have a lot of education, it’s relatively easy to reject the scientific way of thinking about things,” said Oliver. He suggests doctors get in there and rectify the situation, educating their patients about the “truth”.

As the Alliance for Natural Health reports, the mockery of natural health claims, treatments, and theories is following a predictable path:

“At first ideas that challenge the conventional wisdom and entrenched interests are mocked. Then, as they begin to gain ground, they are studiously ignored (hush—don’t let people hear about this!). In the third stage, the establishment feels really threatened and fights tooth and nail to destroy the new ideas. When that fails and the new ideas finally triumph, the opponents simply shrug their shoulders and say: Oh, we knew that all along.”