Reality Check with Ben Swann: If Haiti Is a “S***hole” Country, Who Is Really to Blame? 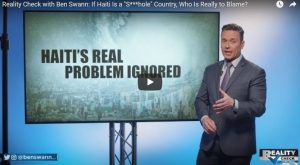 Reality Check with Ben Swann: If Haiti Is a “S***hole” Country, Who Is Really to Blame?

It’s been a couple of weeks but I had to take this one on: President Trump reportedly refers to African nations as well as the island nation of Haiti as a “shithole” and the media, both on the left and the right loses their minds. But here’s the problem—while media and politicians want to fight about Haiti, nobody seems to care that Haitians have been ripped off by American foreign aid and politicians for years. Let’s give it a Reality Check you won’t get anywhere else.