Reality Check: Why Did Trump Abandon the Iran Deal? 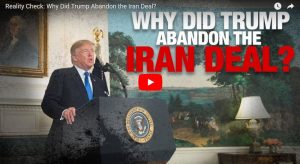 Reality Check: Why Did Trump Abandon the Iran Deal?

President Trump announced Tuesday that the U.S. will pull out of the Iran nuclear deal.

It is a campaign promise that he made repeatedly during the election. Trump has said the Iran deal is the worst of all time, and instead of staying in it he’s going to impose new sanctions against Iran. So why did Trump abandon the Iran deal? Was it truly a bad deal, or was there influence coming from Israel?

And what could that influence mean for our future? This is a Reality Check you won’t get anywhere else.