Reality Check: Trump Did Not Make It Easier for Severely Mentally Ill People To Buy Guns 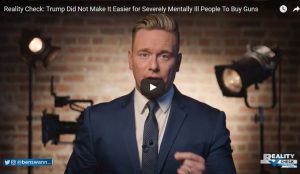 Reality Check: Trump Did Not Make It Easier for Severely Mentally Ill People To Buy Guns

The latest mass shooting at a school in Florida is once again reigniting the debate over gun control and mental health. But now the media headlines are blaming President Trump because, they say, he signed a bill that actually made it easier for people with severe mental health problems to get guns. Is that true? Let’s give it a Reality Check you won’t get anywhere else.

1 Comment to “ Reality Check: Trump Did Not Make It Easier for Severely Mentally Ill People To Buy Guns”