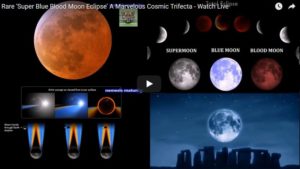 The Sky will turn a deep blood red across the planet as a rare celestial event unfolds. A Rare ‘Super Blue Blood Moon Eclipse’ Occurring Jan 31. Three Separate Celestial Events, a Supermoon, a Blue Moon and a Full Lunar Eclipse will Occur Simultaneously at the End of January.

We are due to witness one of the moon’s most rare and beautiful sights at the end of this month. For the first time in 150 years, a stunning display of celestial bodies will coincide to reveal what is being called a “Super Blue Blood Moon.” The super blue blood moon is the combination of three lunar phenomena, a supermoon, a blue moon and a blood moon. “Supermoons” happen when a full Moon is closest to the Earth, appearing bigger and brighter than normal…the fist one appeared on the night of January 1 and the next supermoon in 2018 will be on the night of January 31. A “Blue Moon” is what you call the second full moon in one month.

A “Blood Moon” is the name given for a view of the Moon during a total lunar eclipse. The lunar eclipse will take place on January 31, and the next one won’t be until 2028. The EarthSky website provides detailed information on where and when you need to be in order to witness the event. http://earthsky.org/?p=270280 Read more here: http://yournewswire.com/the-super-blu… The seldom-seen event will be visible in western North America, Asia, Australia, and elsewhere across the Eastern Hemisphere.

New Zealand, much of Australia and central and eastern Asia will all get a very good view, with some of the rest of Asia, Eastern Europe and the Middle East getting to see some of it. So, if you’re in one of those lucky locations and want to see an event that’s literally once in a blue moon—here’s your chance.