Last December 8, 2016, Ramtha Predicted that UFOs Would Trail President Trump’s Plane and Described the Significance of these Coming Events for Disclosure

“The first time he looks out the window of his mighty-fine, used-but-nice jet and sees two silver discs waving beside him as an escort, he is going to know it all. This is a man who is not afraid. He is going to know it all. Not only will he learn about the energy systems that have been kept from the American people and the world, used exclusively for the military and the privileged, he is going to expose it all. He had no problem doing what he has just done. He is fearless. He is fearless, because he is an optimist. He knows there is more that can be made. Do you understand?”
“You will learn that there are other alien civilizations. The whole world will learn it.”

BZ: Watch at the 1:50 minute mark and again at 2:55 minute mark you can see an unidentified object traveling rapidly from lower left to upper right of plane flight path in screen. Footage is being shot from a jet fighter escorting the plane. 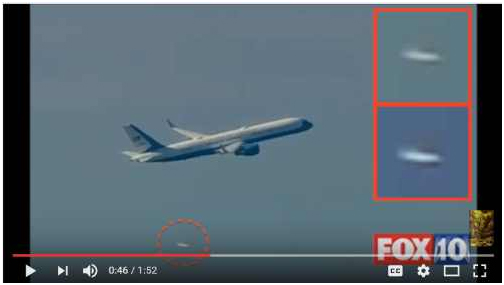 Journalist and RSE student Michael Knight published in his North Star Newsletter, January 21, 2017, the news going viral in social media reporting UFOs flying right by the military plane taking president-elect Donald Trump from New York to Washington on Thursday January 19, 2017, for the Presidential Inauguration to be held January 20, 2017. The UFOs were spotted in a FOX10 News report featuring the take-off and departure from New York’s La Guardia airport.  See the video stream from FOX News here, and watch carefully, especially at minute 2:55, to spot the unidentified flying objects zooming by the airplane at great speeds! 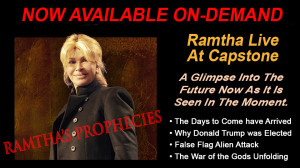 Ramtha’s full Prophecy Teaching from December 8, 2016 is available online on-demand to all RSE students, current and noncurrent. Check it out for yourself and find out Ramtha’s extraordinary vision for our future in the next 4 to 6 years. Don’t miss it!