Two weeks ago, in our latest comparison of Bitcoin and its up and coming competitor, Ethereum, we said “step aside bitcoin, there is a new blockchain kid in town.” Actually, we said that for the first time back in February when Ethereum was still trading in the low teens (the return on ETH since then is roughly 3000%), but the most recent glance provided some perspective on where the competition between the two largest cryptocurrencies may culminate, because according to at least two venture capitalists, the market cap of Ethereum – currently roughly $35 bilion – and whose share of the market has been soaring, will surpass that of Bitcoin, at ~$43 billion although it changes by the second, sometime before the end of 2018.

Two things: first, at the current rate of gains in Ethereum market share (and loss in Bitcoin’s), the inflection point between the two will come not in months, or weeks, but perhaps days. 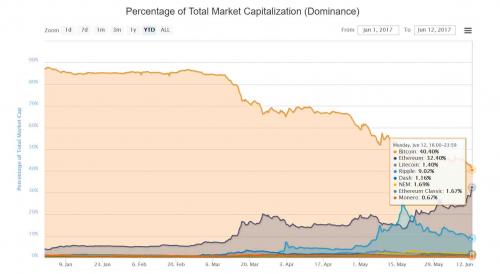 Second, said inflection point may come in even faster if Vladimir Putin has anything to say about it, because as Bloomberg reports, “Ethereum has caught the attention of none other than the Russian president as a potential tool to help Russia diversify its economy beyond oil and gas.” Putin met Ethereum’s young founder Vitalik Buterin on the sidelines of the St. Petersburg Economic Forum last week and supported his plans to build contacts with local partners to implement blockchain technology in Russia, according to a statement on Kremlin’s website.

Speaking at the Economic Forum, Putin said that “the digital economy isn’t a separate industry, it’s essentially the foundation for creating brand new business model” and discussed means to boost growth long-term after Russia ended its worst recession in two decades. As explained repeatedly over the past 6 months, besides being a method of exchange, Ethereum is also a ledger for everything from currency contracts to property rights, speeding up business by cutting out intermediaries such as public notaries. It also does not suffer from some of the size limitations that have paralyzed bitcoin in recent months.

Furthermore, just like the western Enterprise Ethereum Alliance which consists of JPMorgan, Intel, Microsoft and other leading blue chips, Russia’s central bank has already deployed an Ethereum-based blockchain as a pilot project to process online payments and verify customer data with lenders including Sberbank PJSC, Deputy Governor Olga Skorobogatova said at the St. Petersburg event. She didn’t rule out using Ethereum technologies for the development of a national virtual currency for Russia down the road.

Blockchain may have the same effect on businesses that the emergence on the internet once had — it would change business models, and eliminate intermediaries such as escrow agents and clerks,” said Vlad Martynov, an adviser for The Ethereum Foundation, a non-profit organization that backs the cryptocurrency. “If Russia implements it first, it will gain similar advantages to those the Western countries did at the start of the internet age.”

What about price targets? Pavel Matveev, co-founder of Wirex told CNBC today that Ethereum could reach $600 by the end of the year, leaving bitcoin in the dust. Until just a few short weeks ago, such a forecast would seem ludicrous. However, considering the recent surge in ethereum prices – recall it hit an all time high of $412 earlier today before sharply dropping then again erasing virtually all losses – it may reach that particular target in just a few weeks.