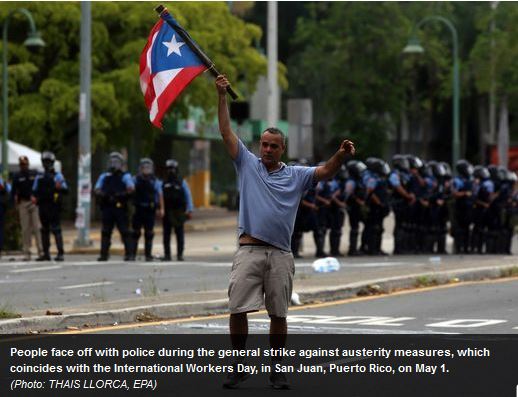 As per our report last night that following the expiration of the litigation freeze, Puerto Rico’s creditors had filed a barrage of lawsuits against the insolvent Commonwealth a bankruptcy was imminent,  moments ago Puerto Rico’s governor announced the commonwealth will request bankruptcy protection of a portion of the island’s $70 billion in debt, setting up a showdown with Wall Street firms owed billions of dollars, in what will be the largest-ever U.S. municipal debt restructuring and further complicating the U.S. territory’s efforts to pull itself out of a financial crisis.

The Puerto Rico restructuring would be far larger than Detroit’s record-setting bankruptcy, with little to no details how long a court proceeding would last or what cuts would are imposed on bondholders. The island’s financial recovery plan covers less than a quarter of the debt payments due over the next decade.

Cited by AP, Gov. Ricardo Rossello said Wednesday that a federal control board overseeing the island’s finances has agreed with his request to put the debts before a court. He told reporters that he has requested that the U.S. territory’s federal financial oversight board commence a Title III proceeding under last year’s Puerto Rico rescue law known as PROMESA. Title III is an in-court debt restructuring process similar to U.S. Bankruptcy.

“We have reached this decision because it protects the best interests of the people of Puerto Rico,” Rossello said.

“The board has agreed to submit Title III protection immediately and they will submit it.”

According to the WSJ, “the governor said he would petition Puerto Rico’s federal oversight board to invoke a quasi-bankruptcy law that puts its standoff with creditors before a judge. His decision marks the start to what could be a lengthy legal fight as Wall Street watches closely to see how other indebted municipal governments may fare in confrontations with investors.”

As a reminder, Puerto Rico and its agencies owe $73 billion to creditors, dwarfing the roughly $18 billion owed by the city of Detroit when it entered what was previously the largest municipal bankruptcy in 2013.

Finally, Bloomberg notes that the financial collapse promises to impose deep losses on bondholders who for years snapped up Puerto Rico’s securities, even as the government contended with a shrinking economy and chronic budget shortfalls. U.S. states can’t file for bankruptcy, and investors bought the bonds assured that it wasn’t a legal option for Puerto Rico either.

BBG further adds that Rossello’s latest offers to creditors last week shows the commonwealth believes general obligations should receive a better recovery than its sales-tax bonds. The latest proposal offered as much as 90 cents on the dollar to general-obligation bondholders. One such bond due in 2035, was among the most actively traded at a price of 66, up from 64.7 on Tuesday.